The Chronicles of Narnia: The Voyage of the Dawn Treader2010

The Chronicles of Narnia: The Voyage of the Dawn Treader (2010) 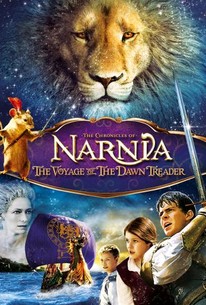 Critics Consensus: Its leisurely, businesslike pace won't win the franchise many new fans, but Voyage of the Dawn Treader restores some of the Narnia franchise's lost luster with strong performances and impressive special effects.

Critics Consensus: Its leisurely, businesslike pace won't win the franchise many new fans, but Voyage of the Dawn Treader restores some of the Narnia franchise's lost luster with strong performances and impressive special effects.

Critic Consensus: Its leisurely, businesslike pace won't win the franchise many new fans, but Voyage of the Dawn Treader restores some of the Narnia franchise's lost luster with strong performances and impressive special effects.

The Chronicles of Narnia: The Voyage of the Dawn Treader Photos

Upon returning to Narnia to join Prince Caspian for a voyage on the majestic royal vessel known as The Dawn Treader, Lucy, Edmund, and their cousin Eustace encounter merfolk, dragons, dwarves, and a wandering band of lost warriors. As the edge of the world draws near, their remarkable adventure at sea sails toward an exciting, yet uncertain, conclusion. ~ Jason Buchanan, Rovi

Will Poulter
as Eustace Scrubb

Tilda Swinton
as The White Witch

Ozzie Devrish
as Slaver
View All

News & Interviews for The Chronicles of Narnia: The Voyage of the Dawn Treader

View All The Chronicles of Narnia: The Voyage of the Dawn Treader News

Critic Reviews for The Chronicles of Narnia: The Voyage of the Dawn Treader

The faux-Odyssean trials the characters face are also paradoxically so strained that they often look more arbitrary than thoughtful.

Not quite a must-see, The Voyage of the Dawn Treader is nonetheless a sturdy outing with many of the charms that have become franchise trademarks.

You can't help wishing the film well, though doubting whether it will get anywhere near Harry Potter's lot at the box office.

It is a fun film that runs under two hours and more or less gets the job done, and while it is far from perfect as family entertainments go this one is of a much finer pedigree than I anticipated beforehand.

Could be an optical illusion, but it seems that a flat, dull movie shot in 3-D just looks flatter and duller.

The visual splendor is still there, in moderate amounts.

Apted's ultimate downfall is the over-utilization of special effects in a film that simply doesn't require them to such excess.

What works on the page does not necessarily work on screen, and the woolly plot structure robs Dawn Treader of much of the previous films' energy.

A good vessel to board for kids of all ages.

The Chronicles of Narnia: The Voyage of the Dawn Treader isn't exactly bad, but it lacks magical resonance and does not make up for it in character depth.

Embarking upon this seemingly endless, dot-to-dot like quest of flat and laborious special effect driven events, we fall victim further still to the franchise's ever growing, deluded and cocksure array of purportedly endearing characters.

Fortunately, by the time we sail into the sweet waters of Aslan's country, things are back on track.

Audience Reviews for The Chronicles of Narnia: The Voyage of the Dawn Treader

This movie has such a great production design that it almost makes me forget how lame the story is. The characters are poorly developed, the plot confusing, drifting from one scene to the next without any cohesion, and the religious allegory is now even more obvious, resorting many times to an "Aslan ex machina" that is really frustrating.

The third part of C.S. Lewis children fantasy novels has only half of the Pevensie kids return to the magic kingdom of Narnia as Prince Caspian, known from part two, requires their help in a search for disappeared lords and abducted slaves. The third human involuntarily joining the adventure is cousin Eustace, an over the top and rather annoying character for the first half of the film. The special effects, production design and locations are top notch, the film looks much better than its predecessors in pretty much every regard. The plot is only somewhat interesting but at least sends the characters to colorful and spectacular locations. The entertaining but somewhat clichéd first half of the film surprisingly comes around in the final act and a really spectacular and fun showdown, the best Narnia film sequence to date. Here, even Eustace finds purpose and redeems himself. The ending is also rather sweet and touching. Kids probably won't be bothered by the rather simplistic dialogs of the first half anyway and enjoy the entire adventure whole-heartedly.

I'd read in my Entertainment Weekly magazine about how boring they (or that editor) thought it was, but I rather enjoyed it start to finish, myself.

I was rather pleasantly surprised in this 3rd installment of the Chronicles of Narnia, feeling that, although a fairy tale and targeted at 10 year olds, there held in this one enough charm and a certain degree of cynicism to overcome the weaknesses so apparent in the 2nd film. This film, while following the 2nd film's coming of age aspects, foregoes many of the epic scenes of battle with all the cool creatures, and therefore becomes more human. Not to say the film is perfect, for there are some odd plot contrivances (for example, having the incompetent and trouble making Eustace included in all the ship's landing parties) and the type of ham fisted plot messages geared for the aforementioned 10 year old mentality, however, if you just check your brain at the door and watch the story unfold, I believe there is enough here to hold an adult's interest (though casting myself in that role may be suspect... LOL). There are some delightful CGI moments, which make the hideously bad CGI that also fills the film so much more glaring. If you look at the all the scenes when the Dawn Treader arrives at the apparently abandoned city, you'll see bad mapping, terribly drawn, static backdrops, and some seriously bad staging once the city's denizens populate the town. The acting throughout was respectable given the archetypes that had to be represented (and really, the mouse out acted all the real characters), and I really enjoyed the bratty performance of Eustace, who added a wonderful degree of adult levity with all this cynicism. Unfortunately there is a plot device that comes at the beginning of the grand fight between goodness and evil, that you know you've seen before... yes, I'm talking about evil taking your worst thought and making it real - shades of Ghostbusters! It would have been hilarious to see the Sta-Puff Marshmallow Man threatening the ship instead of the sea monster that was conjured out of Edmund's psyche (though I kind of enjoyed seeing a cameo appearance by the ice queen who, after Edmund complained that she was already dead, proclaimed "I'll never be truly dead as long as I exist in your mind"... pretty heady stuff when you think about it). I have to point out however that if you're thinking Ghostbusters rip-off, you may have it backwards - for C.S. Lewis penned The Dawn Treader decades before Ghostbusters. In the end, this is miles away from Tolkien, but then again, the books are as well (closer to Potter actually, both in target audience and tone); and certainly there have been far worse films based on beloved children's books (The Gold Compass comes to mind).

The Chronicles of Narnia: The Voyage of the Dawn Treader Quotes