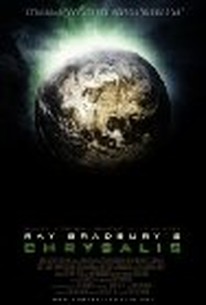 In the future: The world is ravaged, a third world war has left our planet in a state of decay. In a research facility a handful of scientists research ways to sustain plant life. Scientist Benjamin Rockwell has been called to this decaying research facility. One of the scientists there, Smith, apparently has died. Smith lies on a table, his body transformed, his eyes and mouth grown shut. After getting over the shock, and completing an examination, Rockwell realizes that there is still a pulse within Smith... His body continues changing...a Chrysalis has grown around Smith in order to protect him. Now in earth's darkest hours these scientists must figure out what mysteries lay inside the CHRYSALIS.

Glen Vaughan
as Smith
View All

There are no critic reviews yet for Chrysalis. Keep checking Rotten Tomatoes for updates!