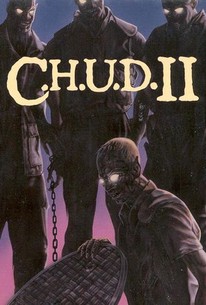 Originally conceived as a Return of the Living Dead sequel and later inexplicably re-titled (despite the highly questionable marketing value of a C.H.U.D. franchise) this clunky attempt at a horror satire involves a pair of teenage do-nothings who abscond from a military base with a corpse who turns out to be a zombie, the by-product of a backfired military experiment. Despite the C.H.U.D. (Cannibalistic Humanoid Underground Dweller) references, Bud (Gerrit Graham) is really a zombie of the George Romero variety, chomping down on human flesh and spreading the virulent zombie plague to those unfortunate enough to be onscreen long enough. Eye-rolling Graham is fun to watch, as always, and Robert Vaughn puts in a goofy performance as a rabidly gung-ho general, but they provide scarce gems of humor in a morass of reconstituted horror plot elements and lame jokes. The end product is more C.R.U.D. than C.H.U.D.

Gerrit Graham
as Bud the Chud

Rich Hall
as Stan
View All

The cannibalistic carnage is so sanitized that it doesn't even provide the basest thrills that gorehounds would look for in a B-movie piece of shlock.

Really shouldn't exist beyond a bad memory of eighties horror.

Does what many 80's horrors have done before it: Takes a serious film, and the cheeses it up hardcore in the sequel. Sometimes, the comedy works and you get things like Dead By Dawn. Sometimes, it doesn't, and you get this garbage.

While the first CHUD was a fun, entertaining horror comedy, this sequel just doesn't retain that vibe, and it ends up being a mediocre film that will surely disappoint fans looking for effective comedy horror material. Stick with the original, as this one is a missed opportunity. The film isn't awful, but it most certainly never is anything worth seeing, and investing your time in such a film. Overall, the film has a lacking script, with poorly constructed dialogue and it's really tongue in cheek stuff as well. I'm all up for a fun, entertaining horror comedy, but that's if it's done right, and since this is a sequel, it seems tiresome, uninteresting and pretty pointless overall. Don't go into this one expecting a fun film like the original. The film has glimpses of what made the original work, but it gets lost due to lazy performances and lack of a truly engaging script. I really wanted to enjoy this film, but I found it hard to get into, and fans of the original will surely be disappointed by this one. CHUD 2 is not awful, but it never takes either and it could have been far better because it had the potential of being a great movie. This film just falls flat, and never is memorable, funny or worth seeing. Stick with the original film, and don't bother with tone, as it feels strained and tries too hard at outdoing the original, which is a big mistake for almost every other sequel. This one could have been good fun if the script would have been better and the performances slightly better. Unfortunately it ends up being a mediocre affair, not worth checking out.

An absolute abomination of a sequel to a far superior film and is quite possibly the worst sequel EVER made even giving a piece of shite like Silent Night, Deadly Night 2 a run for the money. Rumor has it that this was originally supposed to be Return of the Living Dead 3 which makes for a true lose-lose situation.

Great & hilarious! *This would be even greater if it were digitally remastered and included great music of today. This would definitely top all zombie favorite lists.