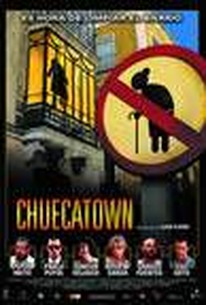 Folks are literally dying to make room in a desirable neighborhood in this black comedy from Spain. Madrid's once-decaying Chueca district has suddenly become fashionable with gay couples looking for flats in vintage-style buildings, and Victor (Pablo Puyol) is a real estate agent determined to make the most of the neighborhood's new profitability. However, a number of choice properties are currently home to elderly women who've lived there for decades and have no intention of moving. Victor isn't about to let a little thing like uncooperative tenants stop him from signing new leases with wealthy clients, and at night he becomes a bloodthirsty killer, murdering old ladies and renting out their now empty flats. One gay couple who've already been living in Chueca are Leo (Pepon Nieto), a driving instructor, and Rey (Carlos Fuentes), who is between jobs. Leo and Rey are flabby, middle-aged and not in step with Chueca's new image, which has already made them a target in Victor's eyes, but when Rey's harridan mother Antonia (Concha Velasco) moves into the building, their days could well be numbered. Chuecatown was the first theatrical feature from writer and director Juan Flahn. ~ Mark Deming, Rovi

This naughty black comedy pokes fun at gay ghetto values in a manner that will please some and annoy others, which is as it should be.

There are no featured audience reviews yet. Click the link below to see what others say about Chuecatown (Boystown)!