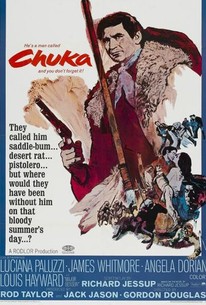 A drifting gunslinger named Chuka (Rod Taylor) arrives at a Southwestern fort and attempts to convince bullheaded Col. Stuart Valois (John Mills) that the outpost will soon come under attack by a hungry tribe of Arapaho Indians. Meanwhile, as the colonel rallies his misfit troops, Chuka finds some time to romance his long lost love, the alluring Veronica (Luciana Paluzzi). Ernest Borgnine and James Whitmore co-star in this traditional western from director Gordon M. Douglas (Stagecoach, In Like Flint).

Rod Taylor's Chuka is an intelligently acted and directed Western that has been burdened, for some reason, with a plot so melodramatic that the effect is lost.

Good acting and fairly decent dialog overcome a situation that has been overused and characters who are standard types for this sort of thing.

Good cast but a grim, rather pointless tale. Still not a bad view.