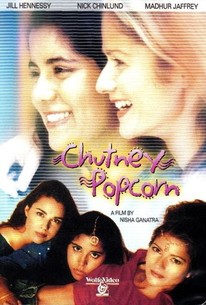 The push and pull of familial bonds and clashing cultures sets the stage for the comic drama Chutney Popcorn. Renna (Nisha Ganatra) is a young woman of Indian descent living in New York, where she works as both a photographer and a body artist who creates henna tattoos. Renna is also a lesbian, which does not please her mother, Meenu (Madhur Jaffrey), who prefers to dote on her more traditionally minded (and happily married) daughter Sarita (Sakina Jeffrey). One day, Renna gets some bad news from Sarita: While she and her husband have been trying to have a baby, her doctor has informed that her she is infertile and will never bear a child of her own. Renna volunteers to serve as surrogate mother for Sarita; she wants to help her sister and hopes this will smooth some of the rough spots in her relationship with her mother. But Renna starts to have second thoughts, as her lover Lisa (Jill Hennessy) feels left out of the loop, and Meenu thinks both Renna and Sarita are making a mistake. Nisha Ganatra co-wrote and directed Chutney Popcorn and also plays Renna; the film was enthusiastically received in its screening at the 1999 Los Angeles Independent Film Festival.

Its strengths are many, but by the end, it's clear that this debut feature has missed one too many opportunities that would have made it a sharper social satire.

With henna tattoos drawing parallels between Indian tradition and the lesbian lifestyle, it's a canny sitcom.

Ganatra and co-writer Susan Carnival do a fine job of illuminating and contrasting the Indian and lesbian cultures, drawing subtle yet strong visual linkages and peppering their script with healthily acerbic observations.

Part portrait of merging cultures, part investigation of the parameters of family loyalty, "Chutney Popcorn" is many things, the most important of which is a very good comedy.

While covering the many tangles and snags of a modern family, Ganatra also examines how immigration affects them.

A funny, observant, and smart look at how differences in values can take place within one family.

Hollywood could learn a thing or two about how to be truthful and lighthearted at the same time from Nisha Ganatra's perky little comedy ''Chutney Popcorn.''

Fantastic movie by Nisha Ganatra!! Great story plot. Filled with a bit of hilarity, but intriguing story about Reena and her sister. Great cast! Phenomenal music!! Worth watching.