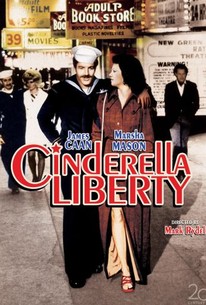 A "Cinderella Liberty" is Navy jargon for a pass that runs out at midnight. Sailor John Baggs, Jr. (James Caan) has such a pass, and intends to make the most of it while his ship is docked in Seattle. He "wins" prostitute Maggie (Marsha Mason) in a pool game, but backs off at a "wham-bam-thank you ma'am" when he finds out that Maggie has a son, an 11-year-old mulatto (Kirk Calloway) -- and that there's another baby on the way. John has so much empathy for Maggie's travails that he marries her. When she loses her baby, however, Maggie feels unable to resign herself to living with John, plagued by both guilt and an unwillingness to be tied down -- thus forcing John to fight for her. Darryl Ponicsan adapted his own novel. ~ Hal Erickson, Rovi

Burt Young
as Master at Arms

Joseph Candiotti
as Officer of the Day
View All

Cinderella Liberty, a movie of enormous good intentions. doesn't work for me because I simply can't believe it.

The Last Detail remains better known due to Jack Nicholson's iconic performance, yet Cinderella Liberty is the one that really gets under the skin.

The movie has its own blessings: vital performances by James Caan as Baggs, Marsha Mason as Maggie, the sweetheart of the service, Kirk Calloway as her moody offspring and Eli Wallach as a crusty old salt.

Its three central performances, especially that of a beautifully understated James Caan, hold the film together nicely, but it never really comes together in a way that takes it to the next level.

Too much sentimentality gives it a false ring.

Mark Rydell's well acted melodrama, which concerns a sailor on leave who falls for a prostitute and her half-black illegitimate son, is too sentimental, failing to find the right tone.

Barely passable film. I can see why it doesn't get aired very often even on TBS. Early Caan but not great Caan.

I remember watching this one night when I was about eight and just loving it. I don't know what I got out of it, but the ending really struck me. Love to see it again.