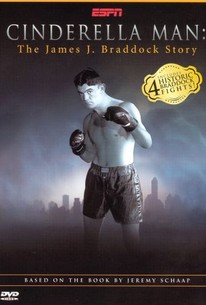 He rose from poverty to become an unrivaled champion in the boxing ring and inspire a entire nation to carry on in a time of unrelenting hardships, and now viewers can take a look at the real-life Cinderella Man who inspired Ron Howard's triumphant tale in the documentary that follows the life of boxing legend Jim Braddock. From his early struggle to make a name for himself in the world of boxing to the late-career comeback that serves as the ultimate example of the American spirit, Braddock was an underdog whose rare, late-career second chance ultimately led him to win the World Heavyweight Champion title and forever alter the course of boxing history. A story as inspiring today as it was when Braddock stepped into the ring to fight for the World Heavyweight title back in 1935, this remarkable story of one man's unbreakable will is sure to have sports fans cheering in their seats.

There are no critic reviews yet for Cinderella Man: The James J. Braddock Story. Keep checking Rotten Tomatoes for updates!

There are no featured audience reviews yet. Click the link below to see what others say about Cinderella Man: The James J. Braddock Story!