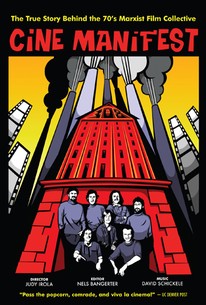 Filmmaker Judy Irola chronicles the 1970s film movement known as Cine Manifest in this 2006 documentary. Comprised of San Franciscan Marxists, the film collective ambitiously sought to produce several cutting-edge politically-relevent movies. Irola herself was a member of the group and in the film she reunites with the other original contributors to reflect on their time together.

There are no critic reviews yet for Cine Manifest. Keep checking Rotten Tomatoes for updates!

There are no featured reviews for Cine Manifest at this time.