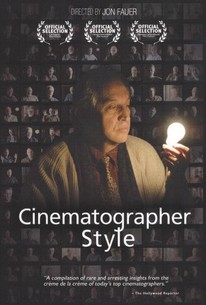 Over a hundred leading cameramen (and women) discuss the fine art of motion picture photography in this documentary. Cinematographer Style is compiled from interviews with a broad cross section of respected cinematographers, ranging from award-winning veterans such as Gordon Willis (The Godfather), Vittorio Storaro (Apocalypse Now), Vilmos Zsigmond (Deliverance), and Haskell Wexler (One Flew Over the Cuckoo's Nest) to contemporary masters of the craft such as Roger Deakins (A Beautiful Mind), Peter Deming (Lost Highway), Ernest Dickerson (Do the Right Thing), and Remi Adefarasin (Match Point). While several participants discuss the tools of their trade, Cinematographer Style focuses as much on the philosophy behind photographing movies -- how they find a style that matches the material, their visual influences, how to prepare for a shoot, establishing a lighting and color scheme, and how "pretty" the image ought to be to match the story. Sponsored in part by Kodak, Cinematographer Style received its world premiere at the 2006 Los Angeles Film Festival.

Cinematographer Style is more of a collage of well-chosen opinions and anecdotes about the art and practice of cinematography than a tutorial or overview of the profession.

There are no featured audience reviews yet. Click the link below to see what others say about Cinematographer Style!