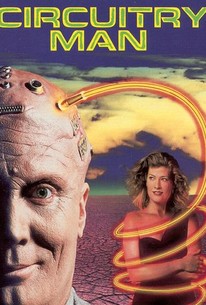 Set in a grim post-WW III America, this sci-fi fantasy tells the story of a woman attempting to sell black-market computer chips that allow patrons to experience the nearly forgotten pleasures of sex and drugs. She is hanging out with the gang she works for in a local nightclub when the police raid the joint. She manages to escape and decides to double cross her gang and sell the chips for herself. But first she must escape both the police and the gangsters and make it to the New York underground. She is helped out when she runs into Plughead, an android covered with electrical outlets. He uses these to tap in to the fantasies of other people. The soundtrack by Deborah Holland provides a highlight.

Jerry Tondo
as Fatch
View All

By far the most interesting character is Plughead, an ex-psychotherapist turned legitimate crook, with metal ports embedded into his skull.

Nothing about the thriller is convincing, but is well-made and quite amusing.

Wildly weird futuristic thriller with some bizarre but inventive notions.

There are no featured audience reviews yet. Click the link below to see what others say about Circuitry Man!