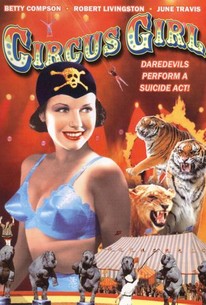 June Travis plays a trapeze star who becomes the romantic bone of contention between Robert Livingston and Charles Jerome. Silent movie veterans Betty Compson and Charlie Murray lend their expertise to this Republic 7-reeler. The aerialist scenes are performed by the Escalante Family Troupe, who also contributed their breathtaking skills to such Hollywood films as Tarzan, the Ape Man (1932),and the Marx Bros.' At the Circus. One of the scripters of Circus Girl was Bradford Ropes, author of the quintessential backstage yarn 42nd Street.

Kathrun Sheldon
as Nurse
View All

There are no critic reviews yet for Circus Girl. Keep checking Rotten Tomatoes for updates!

There are no featured reviews for Circus Girl at this time.