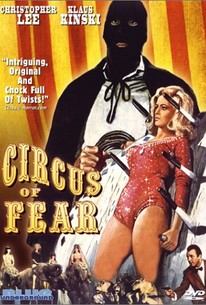 Based on an Edgar Wallace murder mystery this chiller centers on a Scotland Yard investigation of a series of puzzling deaths plaguing a traveling circus and the hunt for loot stolen from an armored car robbery. Suspects include the mask-wearing and disfigured lion tamer, a vengeful ringmaster, an insanely jealous knife-thrower, and a blackmailing dwarf called "Mr. Big." The film is also known as Circus of Fear. A German version was shot simultaneously with Psycho-Circus but used a different director. Though available in color in Great Britain, most of the American copies of the film are in black-and-white. ~ Sandra Brennan, Rovi

Critic Reviews for Circus of Fear

Though muddled, the film is moderately entertaining.

Taken on its own terms, the film is a passable time-waster, though just barely.

Mainly a curiosity for film historians, Lee fanatics, and devotees of stock footage and unimaginative screenwriting and direction.

Audience Reviews for Circus of Fear