Citizen Clark... A Life of Principle2018 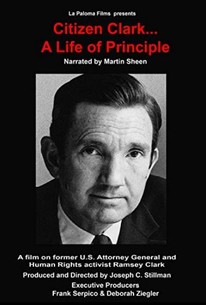 For the past fifty years, former U.S. Attorney General and Human Rights activist Ramsey Clark has challenged the abuses of U.S. power and championed numerous causes that have affected humanity. This documentary examines his lifetime commitment to movements from Civil Rights, to U.S. wars, to incidents like the Parkland, Florida shooting. His perspective on our democratic principles and assessment of "American policies" that have affected our country and the world are discussed for future generations to utilize. As a participant who helped to write some of our country's greatest legislation (The Civil Rights Acts of 1964 & 1968 and the Voting Rights Act of 1965, among others), Ramsey Clark's life has been a steadfast example of a truth seeker on a mission to expose the facts. Ultimately, this documentary will examine policies of presidents from John F. Kennedy to Barack Obama and how those administrations impacted American lives and the rest of the world.

Critic Reviews for Citizen Clark... A Life of Principle

There are no critic reviews yet for Citizen Clark... A Life of Principle. Keep checking Rotten Tomatoes for updates!

There are no featured reviews for Citizen Clark... A Life of Principle at this time.