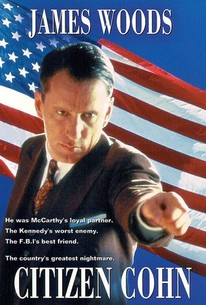 Made-for-cable television and based on a fascinating best-seller from Nicholas von Hoffman, Citizen Cohn offers a provocative look at a deeply disturbing figure in American history, Roy Cohn, an ambitious attorney who played a crucial role in the promotion and enactment of Senator Joe McCarthy's devastating witch hunts of the late '40s through the late '50s in which the government persecuted and destroyed the lives of people suspected of having un-American attitudes, behavior patterns or affiliations. The once powerful Cohn is seen reliving scenes from his life while lying deliriously in a hospital bed waiting to succumb to AIDS.

There are no featured audience reviews yet. Click the link below to see what others say about Citizen Cohn!