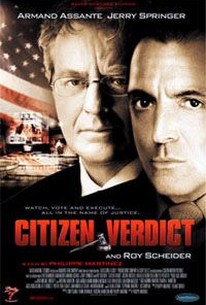 Justice is turned into a game show, with life and death as the stakes, in this satirical drama. Florida governor Bull Tyler (Roy Scheider) is trying to ease the dissatisfaction of his constituents in the midst of a major crime wave by getting tough on wrongdoers, and television producer Marty Rockman (Jerry Springer) has offered him a high-profile way to do just that. Rockman, best known for his splashy reality programs, has come up with an idea for a new show -- "Citizen Verdict," in which an alleged murderer is tried in three hours on broadcast television, with the viewers voting on the guilt or innocence of the accused. If 75 percent or more of those who call in vote to convict, the defendant will be executed as part of a pay-per-view special to follow. Tyler thinks the show could be a good publicity stunt and gives his OK, with Ricky Carr (Raffaello Degruttola), accused of murdering the host of a popular cooking show, given the honor of starring in the first episode. Carr is being defended by Sam Patterson (Armand Assante), a once-respected civil rights lawyer fallen on hard times, while prosecutor Jessica Landers (Justine Mitchell) represents the state. Citizen Verdict was the first directorial project from producer Philippe Martinez.

Cheap and flashy, and made with a kind of pulpy B-movie zest, Citizen Verdict pushes all the expected buttons.

Scenes seem slapped together and mismatched, performances vary from tight and sardonic to mopey and melodramatic.

Rich Cline
Shadows on the Wall
View All Critic Reviews (5)

There are no featured audience reviews yet. Click the link below to see what others say about Citizen Verdict!