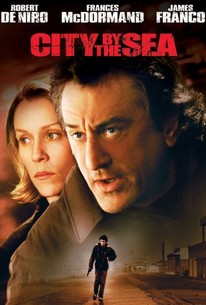 Critics Consensus: Even though the movie is well acted, it sinks under an abundance of melodrama and cliches.

Critics Consensus: Even though the movie is well acted, it sinks under an abundance of melodrama and cliches.

Critic Consensus: Even though the movie is well acted, it sinks under an abundance of melodrama and cliches.

City by the Sea Photos

A man struggling to come to terms with the sins of his father makes the terrible discovery that his own son has fallen into a life of crime in a drama based on a true story. Vincent LaMarca (Robert DeNiro) is a dedicated and well-respected New York City police detective who has gone to great lengths to distance himself from his past; four decades earlier, Vincent's father Angelo killed a young child, and since then Vincent has carried emotional scars from this incident that he refuses to show to the world. Vincent lives alone in a small apartment building, though he has nurtured a close if tentative relationship with his downstairs neighbor, Michelle (Frances McDormand). One day, Vincent and his partner, Reg Duffy (George Dzundza), are assigned to investigate a murder when the body of a young man is found dead in a dumpster. It turns out the body was that of a drug dealer, and the dealer's partner in crime, Spyder (William Forsythe), believes the killer was one of his regular customers -- a junkie would-be musician who calls himself Snake (Brian Tarantina). City By the Sea was adapted from a piece by journalist Mike McAlary which first appeared in Esquire magazine; the cast also includes Eliza Dushku and Anson Mount.

Critic Reviews for City by the Sea

It doesn't help that much of City by the Sea plays so precisely lock step in the same order as so many other policiers. It's difficult to muster up much excitement as the film lurches to its pre-ordained conclusion.

A compendium of clichés about fathers and sons.

A film that doesn't just support the action to come, but makes it seem inevitable.

It all adds up to a moving film that may not be unforgettable, but it is memorable nonetheless.

It's a shame that the source material and filmmakers manage to waste all the talented actors in this project.

The film ends up as shallow as the thankless love interest role Frances McDormand somehow agreed to play here.

Caton-Jones ... understands that this story is not about how all the details work out, but about one man's heart and his slow awakening to moral responsibility.

If Rebel Without a Cause were told from the father's perspective, the result would probably be something like City by the Sea.

Audience Reviews for City by the Sea

City by the Sea doesn't seem to know what kind of movie it wants to be: the waxy nostalgia for Long Beach undercuts any of the hard crime story it's going for, and the hint at family redemption on the other side of the father-son conflict coin feels contrived; the insistent score reminded me that no one really makes movies this way anymore, which I think is a good thing, and the fact that most of the dialogue is little more than exposition (when it's not characters sappily pleading platitudes to each other) makes a strong argument against trying to please everyone that the film-maker should heed the next time out.

3 3/4's--I rather liked this for what it's worth. Not a big blockbuster movie. A little slow, but it contains some really good actors...minus William Forsythe. I cringe when I see him in movies. All in all, this was an interesting film, and it was a lot better than I had anticipated. Excellent performances by both De Niro, Franco, and Mc Dormand.

Michael Caton-Jones takes the helm for this low-key crime thriller about a veteran cop named Vincent LaMarca who becomes conflicted when he learns that the latest murder suspect he's after happens to be his estranged son Joey LaMarca, a troubled junkie. Grim, gritty, and a tad grungy, this should be a great movie. It's got nice atmosphere, a decent set up, and a cast that includes Robert De Niro, James Franco, Frances McDormand, William Forsythe, and Eliza Dushku. However, this just kinda falls flat, especially towards the end. It all starts off decently though, but the film ultimately lacks a strong amount of energy and drive, so the potential for greatness gets squandered, and the film just kinda drifts along without much purpose a lot of the time. The performances are decent, though, and I like the location shooting, but in the end, this really isn't strong enough to warrant much of a recommendation. It comes close, though.

Vincent LaMarca: How'd we get this way son? I remember the day you were born.  Joey: Yeah? Well, I remember the day you left. So we're even.  "When you're searching for a killer... the last suspect you want to see is your son." This is a very average movie with a few great actors and a couple horrible ones. With a better bad guy, this could have been a lot better, but they went the route of William Forsythe and that hurt the movie a lot. Then they threw in Elisha Dushku as Gina and that's pretty much a death sentence for any movie. Robert De Niro, James Franco and Frances McDormand do what they can to save this film from being what it is, but it isn't enough. Vincent LaMarca is a cop who's father was executed for the murder of a baby when he was just eight years old. Now he is investigating a case of a murdered drug dealer and the prime suspect is his son, who he hasn't seen in many years. He has quite a conundrum on his hands. He has to decide how to play this thing. Then more and more things come to the surface which makes it harder and harder for Vincent to act on any impulse.  City by the Sea isn't a horrible movie only because of the three excellent actors the film has. Without them, this would have only been a laughable, cliche, and extremely dull film. With them it manages to be entertaining to an extent. Just not enough to overcome the predictable story line and some of the other performances from actors that aren't excellent. It is worth a watch if you really like De Niro or Franco. Just don't expect to be blown away by it.

City by the Sea Quotes