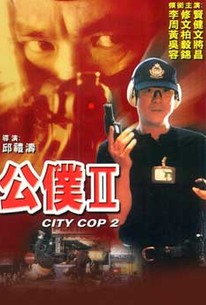 Despite its Chinese title and the presence of star Danny Lee, this standard police thriller from Hong Kong director Herman Yau is not a sequel to Lee's 1984 blockbuster Law With Two Phases. Indeed, Lee only appears in about 15 of the film's 100 minutes. The film's real stars are Parkman Wong and Michael Chow as a pair of bickering Hong Kong policemen trying to nab the villainous Mainland thief Ng Wai-hon (Ben Ng) and his trigger-happy cohorts. Wong is the overly cautious veteran and family man, while Chow is the careless, gung-ho one. Yau manages to get in some good chases and fights regardless of the film's slavish formula plot line, and Yu Kwok-bing's cinematography is better than usual for a Yau film. Peter Yung and Tam Suk-mui co-star. ~ Robert Firsching, Rovi

There are no critic reviews yet for City Cop II. Keep checking Rotten Tomatoes for updates!

There are no featured reviews for City Cop II at this time.