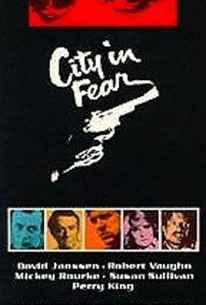 In his last appearance before the cameras, David Janssen plays an alcoholic journalist desperate for a comeback. Janssen hitches his star to ruthless publisher Robert Vaughn, who is exploiting a rash of brutal murders to sell papers. The danger here is that the unknown serial killer, who preys upon beautiful young women, is rapidly becoming a media celebrity--and may be prompted to continue killing just to see his name in print. Beyond its own potential for sensationalism, City in Fear raises several provocative questions about the responsibility (and culpability) of the press. For its March 30, 1980 premiere, City in Fear was given a two hour and fifty minute timeslot.

Critic Reviews for City in Fear

There are no critic reviews yet for City in Fear. Keep checking Rotten Tomatoes for updates!

There are no featured reviews for City in Fear at this time.