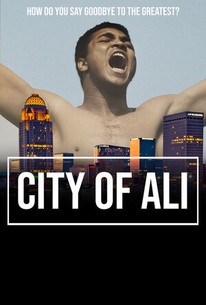 This feature-length documentary directed by Graham Shelby details how for one week in 2016, the people of Kentucky - the hometown of Mohammed Ali, banded together against the odds to celebrate the life of the world famous boxer in his death. In the backdrop of a polarizing U.S presidential election, the Black Lives Matter movement and a potential ban on Muslims, over 100,000 people came out in Louisville for Ali as testament to his impact on his home state and town. Featuring footage and interviews with the man himself and previously unheard accounts from those that knew him.

Critic Reviews for City of Ali

The film is decidedly hagiographic but, in a time of heightened racial unrest, it's worth being reminded of the fighter Ali's origins.

Like many of the onscreen interviewees, I found myself tearing up several times, even when I knew the film was taking quick jabs at my tear ducts.

Muhammad Ali is probably already the most dramatized and documentarized athlete in film history, and "City of Ali" makes for an extremely lightweight addition to the former heavyweight champion's cinematic universe.

Louisville's adulation for their native son has been thoroughly documented by this soul-lifting film.

It really is quite moving. It's a little too long... but an interesting film altogether.

City of Ali could be longer but the documentary is a solid addition to the Muhammad Ali film canon--one that comes with a Louisville-based lens.

The death of Breonna Taylor...dampens, in ways the filmmakers could not have foreseen, an upbeat film

Ali's passing saddened people around the world, but in the social milieu of Louisville, his influence will take a long, long time to fade.

The eulogies alone are worth the price of admission and interviews with family members, close friends, and associates add even more to his story.

There are no featured reviews for City of Ali at this time.