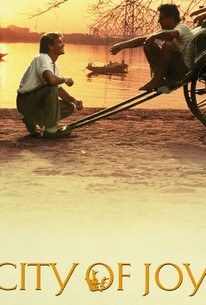 In this drama, a wealthy American doctor learns some important lessons about life in one of the poorest cities on Earth. Max Lowe (Patrick Swayze) is a Houston surgeon who has grown weary of the bureaucracy of American medicine. When he loses a patient on the operating table, Max impulsively decides to leave America and travel to India in the hope of "finding himself." Not long after he arrives in Calcutta, Max is attacked by a group of thugs and left without money or a passport. However, a man named Hasari (Om Puri) comes to Max's rescue. Hasari had left his farming community to come to the city, only to be overwhelmed by its dirt, crime, and overcrowding. Despite their poverty, Hasari and his family take Max in and bring him to a medical clinic in the City of Joy, one of the poorest slums in the city. The clinic is run by Joan Bethel (Pauline Collins), an Irish-American nun who urges Max to use his skills to help the people of Calcutta who so desperately need it. Max signs on, and he finds that the experience changes his life. City of Joy was based on a novel by Dominique Lapierre.

Critic Reviews for City of Joy

In City of Joy, the camera is constantly craning back over crowded streets, a grand movement which simply underlines the lack of connection between the large and small-scale elements of the project.

The unpleasant surprise is Ennio Morricone's score, his worst ever. The final chorus sounds like 10,000 Pekinese puppies stuck in a cave.

City of Joy seems a little too "written," too conformed to the rituals of Hollywood screenplays. There's so much interesting stuff in the movie we are prepared to forgive that.

This tale of self-discovery works more fascinatingly as a quasi-documentary/travelogue than as a human drama.

Shows how two men experience the enhancement of their lives by caring, commitment, and community.

Audience Reviews for City of Joy

A fantastic depiction of the struggles of the Poor in Calcutta

Patrick Swayze's character and story are a bit contrived, but the film is saved by Om Puri's superb performance as a fearful farmer who becomes a hero.