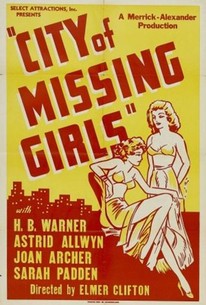 A girl reporter discovers that her own father runs a shady "school of fine arts" (read brothel) in this independently made potboiler directed by former silent screen actor Elmer Clifton. When several naive young girls turned "nightclub entertainers" end up dead, snoop sister Nora Page (Astrid Allwyn) enrolls herself in the Crescent School of Fine Arts, a recruiting center for King Peterson's (Philip Van Zandt) notorious nitery. Things get a bit dicey when Nora's ally, a young district attorney (John Archer), is found in a compromising situation with one of the girls (Patricia Knox) but Nora, with the assistance of Police Captain McVeigh (H. B. Warner), follows a different trail, a trail that leads directly to her own father, a supposedly upstanding theatrical agent (Boyd Irwin).

There are no critic reviews yet for City of Missing Girls. Keep checking Rotten Tomatoes for updates!

There are no featured reviews for City of Missing Girls at this time.