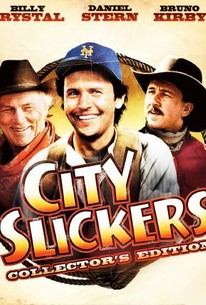 City Slickers blends sight gags, one-liners, and sincerity, with both humor and drama arising from the characters and their situations. Mitch (Billy Crystal) is a radio station sales executive who finds himself in the throes of a mid-life crisis; accompanied by two friends, Phil (Daniel Stern) and Ed (Bruno Kirby) in the grip of similar problems, he heads to New Mexico for his birthday to participate in a two-week "vacation" cattle drive to Colorado. The three friends and the rest of their group, including an attractive, newly single young woman and two African-American dentists, are all urbanites lost when it comes to herding cattle and surviving on the prairie; it's up to authentic, almost mythic cowboy Curly (Jack Palance, who won an Oscar for the role), to whip them into shape. As various adventures occur along the way, including run-ins with outlaw cattlehands, treacherous natural mishaps, and Mitch's delivery of a newborn calf, the three "city slickers" open up to each other, learn to appreciate Curly's Old West values, and begin to resolve their midlife dilemmas. When Curly dies, it's left to Mitch, Phil, and Ed to bring in the herd.

Fred Maio
as Doctor
View All

A diverting if bumpy ride...

City Slickers is one cattle drive you won't want to miss.

City Slickers is really about how the West can never be more than a dream to contemporary urban Americans. With high comic style, it shows us what a lovely dream that is.

Director Ron Underwood (who made his feature debut on Tremors) generally keeps the herd moving at a fine pace.

A comedy that was and is ambitious and counterintuitive.

Fortunately, Mr. Crystal is an enjoyable enough comic presence to generate good will and keep the film feeling reasonably smooth.

Billy Crystal displays his typical brand of humor, fittingly embodying a role written for him, while Palance's gravelly-voiced persona is unforgettable.

An engaging, expertly played piece, which gently pokes fun at both midlife crises and the Wild West.

The first half of this film is very funny, in a Hee Haw vs. thirtysomething way.

One of those rare cinematic happenings: a movie that deftly combines laughs with sentiment and an occasionally serious thought.

Many of the character exchanges are priceless (including a discussion on how to properly program a VCR), and the performances are uniformly fine.

Crystal's then-hegemonic stardom constantly realigns the film into his, not his character's, orbit.

Fish-outta-water tale as a trio of urban yuppies venture out West to ultimately reevaluate their lacklustre lives. I came in set to disparage the proceedings simply because of the writers (Ganz and Mandel) but was pleasantly surprised with the unusual restraint shown. Should Palance have won the Best Supporting Oscar for this? No. Hollywood simply slipped him his Lifetime Achievement under the table, but he does provide the pungent illusion of what we, the audience, might consider the Ol'West to've been like. Not bad.

An absolute classic that's too corny once in a while, but only because it's playing with conventions of the cowboy genre (baked beans, singalongs, cattle drives, Jack Palance, etc.). Billy Crystal is not one of my favourite actors, but we see a real growth in him as he pulls himself out of a midlife crisis along with his two lifelong best friends on a two-week trip during which they take a herd of cattle from New Mexico to Colorado. A real "Guy Movie," in a sense, and Jack Palance as Curly - same nickname as the violent rancher in John Steinbeck's Of Mice and Men, by the way - fully deserved his Best Supporting Actor Oscar, walking the line between playing it straight and completely camping it up. Great, fun film, highly recommend.

Three friends in a mid-life crisis goes on a Wild West adventure together, to re-ignite their lost passions for life. This isn't really a Western movie in the classic sense though, but more like a fish-out-of-water comedy, with influences from said genre. It does have the same feel of one, however, and is one of the most enjoyable films of its kind. Billy Crystal is hilarious with his sarcasm and cynical sense of humor, and together with Daniel Stern and Bruno Kirby they make up a really fun trio. You'll also find Jake Gyllenhaal in a very young role here. Not to mention Jack Palance, who is very memorable as Curly Washburn - an old legendary cowboy who oozes intimidation. If there was ever a contest for most bad-ass cowboy in cinema, it would be a close race between him and Clint Eastwood. Long story short: a highly entertaining movie, and one of my all-time favourite Westerns.