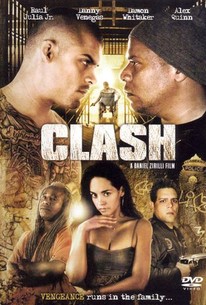 When a powerful drug dealer is left wheelchair-bound by a bullet and his father is murdered by a vigilante detective, he is forced to choose between revenge and redemption in a gritty urban drama from director Daniel Zirilli. Hector Pinero (Danny Venegas) was the king of the streets before a heated gun battle left him without the use of his legs. To make matters even worse, Hector soon discovers that psychotic Detective Derose (Damon Whitaker) has taken the law into his own hands and killed Hector's father in cold blood. After tracking the renegade lawman down and engaging him in an intense firefight, Hector is thrown in prison on an "attempted murder" charge. When the day of his parole finally arrives, Hector is forced to choose between risking it all to settle the score, or simply walking away from the violence in search of a better life.

Alex A. Quinn
as Officer Boltz

Mike Hall
as Prisoner No. 1

There are no critic reviews yet for Clash. Keep checking Rotten Tomatoes for updates!

There are no featured audience reviews yet. Click the link below to see what others say about Clash!