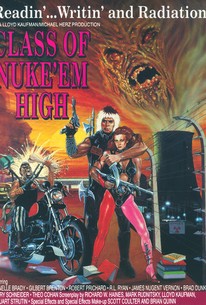 Trash-movie moguls Lloyd Kauffman and Michael Herz -- the creative team (so to speak) behind distributor Troma Films and makers of The Toxic Avenger -- foist yet another epic of bad taste upon the viewing public with this melding of teenage sex-comedy and slime-oozing monster mayhem, described by the filmmakers as "like The Breakfast Club, only not as stupid, and really, really drunk." The story involves the student body of Tromaville High school, who resemble the usual group of slackers, stoners and surf punks who drift through the halls of academe... except this is Tromaville, and the dilapidated nuclear plant is busily churning out glowing green effluvia next door. Before long, the kids are glowing in the dark too, riding hell-bent through the hallowed halls on their choppers, shrieking obscene pseudo-songs and giving birth to slimy mutant offspring... pretty much business as usual. The only way to put this film into any kind of perspective would be to say it's never dull; fans of Troma product (the cinematic equivalent of head cheese) should be delighted. Followed by two sequels, subtitled respectively Subhumanoid Meltdown and The Good, the Bad and the Subhumanoid. ~ Cavett Binion, Rovi

Erika Zatt
as Person at Party

Michael Popowitz
as Person at Party
View All

By Troma standards, this qualifies as a "classic." It isn't by anyone else's, though there are some good moments.

"Better" than much of Troma's output -- but it's all relative.

Troma Films deliver another B movie trash fest with Class of Nuke 'Em High. This is one crazy comedy horror film that is very over the top. If you're familiar with Troma's catalogue, you'll know what I'm talking about. This film is not without its flaws, but is definitely lots of fun from start to finish. If you love low-budget schlock, then this is the perfect film for you. I enjoyed every minute of it. The film is part, horror comedy, and part monster flick and part exploitation film. This film definitely is a must see for horror fans who want something ridiculous to watch. Although not as memorable The Toxic Avenger, Class of Nuke 'Em High definitely is fun from start to finish. Don't expect anything consistent here, you won't find it. This is a good little film from the folks at Troma films who really know how to deliver effective so bad its good films that are simply mindless fun. I very much enjoyed the film. There's plenty to enjoy on-screen, if you're in the right state of mind for these types of films. This is a good film that has enough gore, boobs and off the wall ridiculousness to please fans of the genre. One thing that Troma films do very well is deliver over the top comedy Exploitation horror, and with Class of Nuke 'Em High they do just that. There's plenty to enjoy with this film and it has something for every horror fan. This is yet another low-budget film, and though flawed, this is nonetheless an enjoyable film that is sure to provide you with a mindless hour and a half of entertainment.

I really liked this movie, it's an awesome nuclear themed teenage comedy horror movie. It's really cool, and I highly recommend it if you like 80s teen movies.

Reading the Plot I already figured out what this movie was about, but as curious I am I wanted to know how would it end. I didnt manage to watch it to end I was yawning to hard.

When it comes to stupid trash films, Troma have no equal; and while the vast majority of their output is absolute rubbish, now and again you'll find a few gems in the rough; and unlikely as it may seem, Class of Nuke 'Em High is one such gem. The film presents a post-apocalyptic style similar to that seen in films such as The Warriors and Escape From New York, and blends it with the idea of a school being run by several students; which is reminiscent of the hit thriller Class of 1984. This is all then mixed in with stoner culture; as its toxic weed that causes all the problems, and you have a recipe for a successful trash flick. The film opens with a 'routine nuclear evacuation drill' at Tromaville High; a school situated next to a nuclear power plant. One kid goes mental, and it's not long before we see that a local gang are buying weed from a nuclear plant worker and selling it to the kids at school. The weed grows faster than normal; and there's a reason for that, as toxic waste has contaminated it and pretty soon the kids of Tromaville High start acting rather strangely... If this film was made by any other production company; I'd probably say it has a point to make about the advent of nuclear power, but since this is Troma it's clear that they've simply lifted a common fear and turned it into a schlock film. There's absolutely no point to it; but seeing all the general carnage is a lot of fun, and director Richard W. Haines isn't afraid to go completely over the top, despite the obvious limitations of his special effects budget. The film plays out something like a zombie movie; although there are influences from other sources, and not all the afflicted characters turn into mindless beings. The gang at the centre of the film is an interesting troupe, and their style fits the jokey tone of the film very well. It's good to see a film like this that has a sense of humour, and absolutely nothing in the film is to be taken seriously; shown best by the fact that the central location is 'Tromaville', and is the 'toxic chemical capital of the world'! The special effects towards the end get a little silly, but it's all in good fun; and while this movie won't be to everyone's tastes, if you enjoy schlock horror - you'll love this!