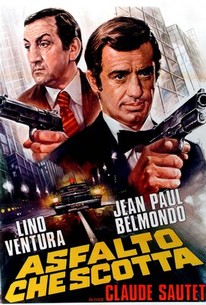 A criminal on the run finds going home after a decade is harder than he expects in this drama from French filmmaker Claude Sautet. Gangster Abel Davos (Lino Ventura) is wanted for murder in France, and has been living underground in Italy for ten years. Since then, Abel has married Therese (Simone France) and fathered two sons, and he's decided it's time to come home. Abel has planed an elaborate scheme in which he'll steal a fortune to finance his journey and head home with Therese and the boys, but little goes as planned, and he arrives in Paris without his wife and running from the law with two kids in tow. An underworld boss who owes Abel some favors helps him put together a plan to travel across France in an ambulance to avoid suspicion, and recruits a headstrong young gangster, Eric (Jean-Paul Belmondo), to serve as Abel's driver and right-hand-man. En route, Abel tries to settle some old score with criminal associates who betrayed him. Based on a novel by Jose Giovanni, Classe Tous Risques was the first feature film from Sautet, who previously had worked as an assistant director for some of France's most prestigious filmmakers. ~ Mark Deming, Rovi

Never wastes a minute of your time, right up to its abrupt ending: this is condensed, intense story-telling that never once loosens its grip.

This Franco-Italian production feels like a classic - with all the traditional punchings, slappings, shootings and coshings - and yet it's utterly unformulaic.

A splendid showcase for the great Lino Ventura.

Sautet's characteristic restraint lacks the killer snap of Melville at his best, and the impetus rather flags as events proceed.

Doesn't quite rate lost-classic status, but it's done with a great deal of dexterity, intelligence and an appealing end-of-'50s cool.

The rerelease of Classe Tous Risques makes you wonder how many other movies this good got scuttled by the French new wave.

The resulting thriller may not surpass [Jean-Pierre] Melville for cool, but rivals him in the hood-with-heart department.

What we're left with 45 years after Classe's awkwardly timed entrance into French film history are some superbly assured performances and well-drawn characters.

Classe tous risques is a taut, original gangster film told with simplicity and a compelling directness, with bare-bones exposition and a neorealist touch.

A tense tale of dishonour among thieves this is as hard-boiled and flinty as anything Hollywood was making at the time.

A sombre, downbeat gem in the hard-bitten tradition of Rififi, it stars Lino Ventura as the big-time gangster fallen on hard times, whose former friends don't want to know

another terrific french gangster film lost in the wake of the new wave, starring tough guy lino ventura as a career criminal who tries to return to france with his wife and children after 10 years away in italy. when things don't go according to plan, his old friends don't want to upset their quiet respectable lives to help out their former pal and so they send a young thief, jean paul belmondo, to his rescue. belmondo was on the brink of stardom here as this was made immediately after 'breathless,' and the film was highly influential on the work of jean-pierre melville

the film begins well, then heads towards one of the most heart wrenching and beautiful second acts ive ever seen on film, and the third act even continues in this leading me to want to give the film at least 4 1/2 stars until an incredibly anti-climatic and disappointing closeout of an otherwise brilliant film. although the film drops an entire star for the horrible ending, i still loved this movie. as a father it was hard to watch but reminded me of how much i love my kids. a gritty crime story with solid performances from belmondo and ventura, highly recommended for anyone into the crime genre.

[font=Century Gothic]"Classe Tous Risques" starts out with a father dropping his wife and kids off at the Milan train station while on the way to work. The father is Abel Davos(Lino Ventura) who was sentenced to death in absentia in France. He and his partner pull off a daring daytime heist. Realizing the police are closing in on him in Italy, Davos makes it back to France and is cornered in Nice. He calls one of his old gang in Paris for help and requests an ambulance. One of his old gang wants to go but is out on bail. The other two are now semi-legit and do not want to risk it. They do send somebody they are unfamiliar with, Eric Stark(Jean-Paul Belmondo), down to Nice with the ambulance.[/font] [font=Century Gothic][/font] [font=Century Gothic]"Classe Tous Risques" is a taut crime drama that is about honor and loyalty amongst criminals. In general, it concerns itself with acts of random kindness, sometimes from and towards the least likeliest of people. There is great location shooting and camerawork.[/font]