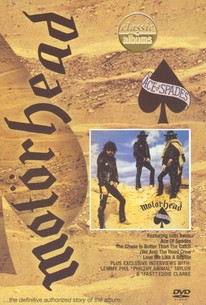 Years before Metallica, Slayer, or Anthrax, Motörhead pioneered speed metal with their hard and heavy sound that roared with the speed and violent impact of a locomotive. Motörhead perfected their sound and style with their fifth album, 1980's brilliant Ace of Spades, and this documentary from the Classic Albums series offers an in-depth look at the making of this hard rock classic. Motorhead: Ace of Spades features interviews with Lemmy Kilmister, "Fast" Eddie Clark and "Philthy Animal" Taylor, who comprised the Motörhead lineup that recorded the album as they talk about how they wrote and recorded this wildly influential album, and play a few of its songs; fans Slash, Lars Ulrich and members of Girlschool also contribute their thoughts.

There are no critic reviews yet for Classic Albums: Motörhead - Ace of Spades. Keep checking Rotten Tomatoes for updates!

There are no featured reviews for Classic Albums: Motörhead - Ace of Spades at this time.