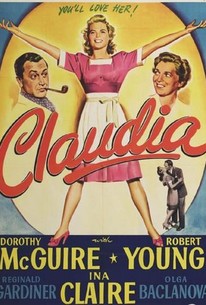 Dorothy McGuire charmingly recreates her stage role in this film adaptation of Rose Franken's Broadway hit Claudia. The title character (McGuire) is the naïve, somewhat childish young bride of David Naughton (Robert Young). Slowly adapting to married life, the unworldy Claudia receives several "wake-up calls" regarding the maintenance of a household, dealing with her husband's (and her own) sexual urges, impending childbirth, and, on a more somber note, the inevitable death of a loved one. A subplot involving the criminal past of the family butler is downplayed on screen, and the film is the better for it. Tops among the supporting cast of Claudia is Ina Claire as the heroine's witty, sprightly and, alas, doomed mother.

Jessie Grayson
as Maid
View All

There are no critic reviews yet for Claudia. Keep checking Rotten Tomatoes for updates!

There are no featured reviews for Claudia at this time.