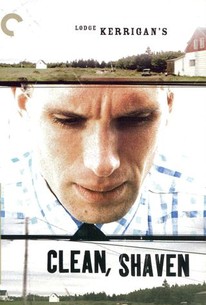 Peter Greene stars in this downbeat character study as a schizophrenic man trying to function in a world that seems thoroughly alien to him, while also searching for his lost daughter. Meanwhile, a detective is tracing his steps in a murder investigation.

Alice LeVitt
as Girl with Ball

Jill Chamberlain
as Teenager at Motel

Rene Beaudin
as Boy on Bicycle

Eliot Rockett
as Man on Ladder/Man in Jeep

Angela Vibert
as Girl in Rain

Karen MacDonald
as Girl in Rain

Michael Benson
as Man in Jeep

Harlan Hamilton
as Drunk
View All

It is a harrowing, exhausting, painful film, and a very good one -- a film that will not appeal to most filmgoers, but will be valued by anyone with a serious interest in schizophrenia or, for that matter, in film.

it is a horror that resides in the imagination as much as in the real world, a horror that viewers themselves help to construct as they piece the film's fragmented parts together according to their own tendencies, (mis)apprehensions and desires.

A definite must-see for the adventurous.

Kerrigan, in the film's denouement, might have succeeded in defying our expectations to the extent that, as in The Sixth Sense, his victory renders what came before it superfluous.

Kerrigan succeeds in challenging stereotypes of mental illness as seen in movies and TV: Clean, Shaven is a stark ripose to the Hollywood notion that the mentally ill are fonts of simple wisdom and goodness.

Hallucinating the whole time, a man recently released from a mental institution tracks down his long-lost daughter, while being pursued by a detective who believes he's responsible for the murder of a young girl. Subjective and disorienting, CLEAN, SHAVEN is one of the most harrowing portraits of paranoid schizophrenia ever filmed; ranks just below PSYCHO and REPULSION in the pantheon of horrifying studies of mental illness.

I didn't like this movie but I think I just wasn't in the mood, it was really disturbing and graphic at times.

A dirty, disturbing, and disgusting film chronicling the life of a man (Peter Greene) with schizophrenia released from a mental institution, and his efforts to reconnect with his mother and to find his daughter, while a detective (Robert Albert) is convinced he is responsible for a murder of a young girl. While, as said above, this is a filthy movie, it will definitely stick with you. The disease of schizophrenia is detailed in rich detail, the little voices popping up here and there, director Lodge Kerrigan really makes you feel like you are experiencing what this guy has to live with, and it feels terrible. Although I do think it ran a little short, and the detective wasn't as colored as he should've been, this is an overall outstanding movie with a phenomenal performance from Peter Greene.

One of those rare films that shake your foundations with its uncomfortable but spellbinding close look of a deeply disturbed man looking for some peace of mind.