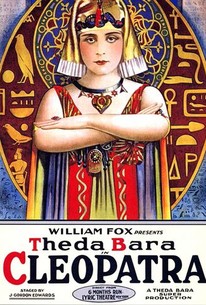 Critics Consensus: Theda Bara is the magnetic focal point of this massive spectacle, with no expense spared to evoke the grandeur and tragedy of Cleopatra's life.

Critics Consensus: Theda Bara is the magnetic focal point of this massive spectacle, with no expense spared to evoke the grandeur and tragedy of Cleopatra's life.

Critic Consensus: Theda Bara is the magnetic focal point of this massive spectacle, with no expense spared to evoke the grandeur and tragedy of Cleopatra's life.

By 1917, Theda Bara had become one of the screen's biggest stars, and her fans had long been suggesting that she portray ancient Egypt's famed queen. So Bara's studio, Fox, shipped her out to Los Angeles for this spectacular production (all of her prior films had been shot on the East Coast). Bara did extensive research on the role, and she knew that Cleopatra was a cunning political leader; the studio, of course, played up the sex angle, so she comes across as a woman who, if she didn't sleep her way to the top, at least slept her way through the top. She first seduces Caesar (Fritz Leiber), then after his assassination, she turns her adversary Pharon (Albert Roscoe) into a lover. Finally, Marc Antony (Thurston Hall) tries to conquer Cleopatra but instead is conquered by her charms. Even marriage to Octavia (Genevieve Blinn) can't keep him from joining his destiny with the Queen of the Nile. It turns out to be his downfall, as Octavia's brother Octavius (Henri de Vries) opposes and defeats him, and he is forced to kill himself. Instead of using the dagger like Antony, Cleopatra prefers the drama of being bitten by a poisonous snake. The studio's publicity department had a field day with the promotion for this picture -- this was when they came up with the brilliant insight that the name "Theda Bara" was an anagram for "Arab Death." Bara herself went along with the fun, first claiming to be the reincarnation of a daughter of Seti, high priest of the pharaohs, and then insisting that in a past life she was Cleopatra herself. Years later, long after the end of her career, she gleefully admitted it was all a wonderful joke. Unfortunately, the film itself, which ran over two hours and was one of the top box office draws of 1917, has apparently been lost. This is especially tragic, since still photos of the elaborate sets and shockingly bare costumes only serve to heighten curiosity about this motion picture.

Genevieve Blinn
as Octavia
View All

The film Cleopatra is another proof that the kinema may accomplish some of the effects of authentic dramatic art if it will only select its subjects judiciously.

[Cleopatra presents] half a dozen of the most artistically beautiful scenes that have ever been photographed.

Scenery and costumes no more constitute a dramatic masterpiece in the movies than they do in the theater. There must be an architecture in the plot, a scientific employment of the stresses and strains of motives.

The costumes are wonderful and are said to have cost a king's ransom. Theda Bara is splendid in the title role.

The battle scene was so well handled as to merit special praise. Even the Sphinx looked on with wondering eyes.

Especially effective are the desert scenes... There are furious races across the desert sands, by way of contrast a furious sea battle, and the struggle raging in the city of Alexandria between the armies of Cleopatra and of Octavius Caesar.

Theda Bara's vivid portrayal of j the famous Egyptian Queen stands out as one of the most daring characterizations ever presented in motion pictures.

This is the occasional screen production that startles by its magnificence and by the hugeness of its representation.

Though truly wonderful scenic effects are brought into play... the most striking feature of all was Miss Bara's simulation of the caprices and allurements of the great Egyptian Queen.

It is only fitting that the most famous modern "vampire" should be selected to play the part of the most famous ancient vampire. Theda Bara's interpretation of the part almost leads one to believe in the theory of transmigration of souls.

Chief interest, however, naturally centers in Theda Bara for her vivid portrayal of the most notable siren in all history.

Theda Bara must be classed among the great players of the day for her creation of this Cleopatra, and the play be ranked high among the spectacles.

There are no featured audience reviews yet. Click the link below to see what others say about Cleopatra!