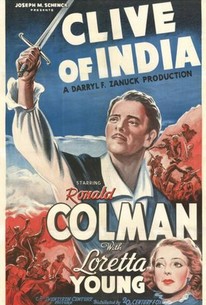 Ronald Colman plays Robert Clive, a true-life 18th century Britisher who works up the ranks to become leader of Britain's military forces in India. Though produced on a superficially lavish scale, the film inexpensively sidesteps several of Clive's more famous battles with Indian insurrectionists, relegating them to offscreen events described by subtitles. The notorious Sepoy Mutiny "Black Hole of Calcutta" incident, hardly a costly event to recreate, is faithfully presented. In real life, Clive was ruined by a trial in the House of Commons, after which he suffered a nervous breakdown and committed suicide. The film tactfully closes on the trial and Clive's reunion with his faithful wife (Loretta Young). Typically jingoistic in its "White Man's Burden" approach to East Indian affairs, Clive of India is best viewed in context of the time it was filmed (1935), when the sun still hadn't set on the British Empire. ~ Hal Erickson, Rovi

Olaf Hytten
as Parson at Hasting

Critic Reviews for Clive of India

It has its high moments.

There are no featured reviews for Clive of India at this time.