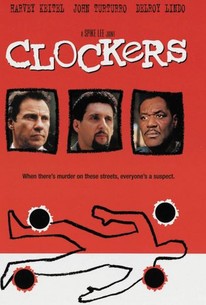 Critics Consensus: A work of mournful maturity that sacrifices little of its director's signature energy, Clockers is an admittedly flawed drama with a powerfully urgent message.

Critics Consensus: A work of mournful maturity that sacrifices little of its director's signature energy, Clockers is an admittedly flawed drama with a powerfully urgent message.

Critic Consensus: A work of mournful maturity that sacrifices little of its director's signature energy, Clockers is an admittedly flawed drama with a powerfully urgent message.

The grim realities of drug dealers' lives provides the basis for this gritty drama. The story centers on Strike, a 19-year old drug dealer who lives in the Brooklyn projects. When Strike agrees to help a local drug lord kill one of rivals, he finds himself in serious trouble.

Keith David
as Andre the Giant

Lawrence B. Adisa
as Stan

Paul Calderon
as Jesus at Hambones

Bray Poor
as Detective No. 1

Craig McNulty
as Detective No. 2

Christopher Wynkoop
as Detective No. 3

Paul Schulze
as Detective No. 4

Donald Stephenson
as Detective No. 5

John Fletcher
as Al the Medic

J.C. MacKenzie
as Frank the Medic

Maurice Sneed
as Davis the Bartender

Michael Badalucco
as Cop No. 1

Rick Aiello
as Cop No. 2

Anthony Nacerino
as Teen No. 1

Brian Konowal
as Teen No. 2

Michael McGruther
as Teen No. 3

Carlo Vogel
as Teen No. 4

Harvey Williams
as `Pick Me Up' Kid

Michael Cullen
as Narc No. 1

Tim Kelleher
as Narc No. 2

Skipp Dudduth
as Narc No. 3

Larry Mullane
as Larry the Narc
View All

A story told with mournful, epic vision that rises high above its grim setting.

In many ways, it's better than the book it's taken from: tighter, tauter, with a deeper vein of sadness opening underneath.

"Clockers" is as grim as it is good. This is not an"entertaining" popcorn- type movie. It's timely. It's tragic in many ways. And it leaves a provocative and lasting impression.

Clockers may be Lee's strongest film since Do the Right Thing, but he runs into trouble at the end when he tries to tie up all his threads in neat bows...the passion of this raw, mournful urban epic remains in spite of the false moves.

There's no denying the movie's greatness: the depth of the characters, the urgency of its narrative, the nightmarishness of its vision.

Clockers is of its time and now feels slightly dated because of it... But it remains a well-crafted crime drama and feels real and true enough to still hit close to home.

Clockers is a tremendous film -- and a major addition to the work of a vibrantly talented director.

''Clockers'' remains a major work by a major film artist, but its cinematic achievements are diminished by its narrative and psychological shortcomings.

Strong performances, edgy dialogue and Lee's success in luring an audience into his own tempo and urgent perspective make Clockers tough stuff, indeed.

This harrowing portrait of a young, ulcer- ridden, low-level drug dealer, or "clocker," adds up to the director's best film since "Do the Right Thing."

What all but sinks Clockers is its muddled script, an indulgent mess that is by turns dull and disorienting.

Based on a novel by Richard Price, who co-wrote the script with director Spike Lee, this is a grim and gritty look at how a police procedural affects the residents of an inner city neighborhood during the aftermath of a murder and the subsequent investigation. There are many players here, but the film predominately follows Strike (Mekhi Phifer)- a "clocker" or street-level drug dealer who works for businessman/supplier Rodney Little (Delroy Lindo). Though Rodney had illegal business dealings, he is also shown to be a mentor to the local youth, and he does give them guidance and opportunities, even if they aren't necessarily the most positive of things. Strike finds himself in deep when he gets involved in the investigation of the murder of one of Rodney's rivals- a man Strike was told to get rid off. While the film does eventually reveal the truth, the bulk of the story probes whether or not Strike actually committed the murder. Besides pressure from Rodney, fellow clockers, and his own conscience, Strike also has to deal with the main cops on the case, played by Harvey Keitel and John Turturro. This seems like a nice, simple, intimate story, and I would have been thrilled had it just stuck to being that. Instead, this small story is blown up, and used as merely a driving force in a broader story about the trials and tribulations of inner city life, specifically the issue of black on black crime. I'm not as thrilled that this film was expanded into a lengthy epic, but I don't think that's a major issue. By having the film become so drawn out and broad, things tend to lose steam and focus from time to time, and the meandering leads to the grit and intensity losing their edge once in a while. But, when the film is on target, it's really on target, and makes for some compelling, well done, and entertaining cinema. It's a decently well shot film, and the art direction and set design are suitably grimy, gritty, and show the plight of people in the inner city. An issue that really gets to me though is the music. Sometimes it's fine, but at others, it really clashes and sticks out. I'm all for ironic uses of music, but it's not really done all that well here, and seems kinda corny. We do get some good performances though, and the themes and ideas are well established, but then again, I'd expect no less from Lee. The film does have its problems, but I don't think they're egregious enough to keep me from giving it the grade that I am. You have to be in the right frame of mind, but if you can tap into this film's groove, and are wanting a broad tale, then sure, give this a look.

"See, dis is where all da money at, ma lil nigga. how you think i got dat fat-ass train set ova dere?"

It's enjoyable at times, but it was a lot more of a small scope compared to Lee's other movies. When it wants to be political it's too obvious, but the rest of the movie is just a mediocre crime drama. Harvey Keitel, John Turturro and Mekhi Phifer all gave great performances, but then again Isaiah Washington was horrible. Really it's only interesting to people who are Spike Lee completists or fans of the individual stars. Otherwise, there's a lot better handled projects out there.

My favorite part of this film is Lee's use of color. Through the production design and the use of reversal film stock, Clockers' colors really pop. Creating a world of vibrant colors to go along with the complexity of the situation at hand. The film is a little bit of everything. Part cop film, part gangster, part family drama part neighborhood drama. Unfortunately the whole doesn't add up to the sum of it's parts. Solid performances and great craftsmanship can't save this film. Not to say that it's bad, it's just remarkably unremarkable.