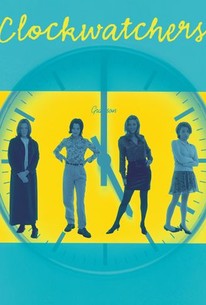 This modern comedy focuses on the daily grind of a group of temporary employees working in a large business office. Iris is the newest temp in a totalitarian-style office and is quickly befriended by the other temps. Things heat up, however, when management realizes that office supplies are being stolen.

Jim Wise
as Man in Bar

Bridget Sienna
as Woman with Cop

A downbeat yet pungent comedy about the indignities of temp life, the film keenly dissects the tenuousness of camaraderie forged among those deemed disposable, and quietly but unequivocally diagnoses the ills of end-of-millennium corporate culture.

This is a rare film about the way people actually live.

I wonder if we'd all know about this film if it featured four leading dudes from the '90s, say Keanu Reeves or River Phoenix or Kevin Costner or Mark Wahlberg. Watch and make amends.

You just want to shake these four twits out of their collective, weirdly unsubstantiated malaise.

Like the unrelenting Musack that fills the heroines's offices, Clockwatchers is a bit too sedate. If you don't watch carefully, you'll miss half the fun.

Complex characterization makes Clockwatchers a far more interesting picture than it would have been as a simple, breezy comedy.

A bold drama about the strange and often outrageous things that happen in the work-a-day world.

A gem of a small movie.

This keenly observed and darkly comic indie is named for a quartet of office temps who toil at Global Credit while receiving no credit of their own.

A not particularly enlightening look at office life. It was of course trumped eventually by the masterful Office Space. The film ultimately raises the question - so what?

Watched this movie a lot as a teenager. I love it's dark humor and the different characters.

What starts as a kind of Nine to Five comedy about a group of young women temping at a credit company, evolves into a rather dark, frustrating, realistic and somewhat depressing dramedy.

Iris (Toni Collette) is the newest temp recruit at a credit company where the key is to "look like you're busy". Incredibly shy, somewhat insecure and lonely Iris is soon befriended by three fellow tempers (Parker Posey, Lisa Kudrow and Alanna Ubach) who welcome her into their world of boredom, under-appreciation and aspiring dreams unfulfilled or out of reach. The catalyst for their friendship becoming stronger before ultimately falling apart is the arrival of a new office assistant and a subsequent string of thefts of everything from stationery to personal diaries. As suspicious eyes turn to the temps ("it's them and us"), it isn't long before bitterness and resentment break out, and things are never the same again.

Despite the truly terrible, 80's looking DVD cover which inaccurately suggests a kooky office comedy, this is actually quite a bleak look at friendship and office politics, and is powerful stuff in parts. Toni Collette, as narrator and lead player, is truly excellent and has a way of portraying inner thoughts not spoken that is quite unique. As the film enters its second phase, you can see her think through possibilities and suspicions and, though the transformation of character she promises in voiceover at the start isn't (thankfully) completely fulfilled, her depiciton of Iris remains compelling throughout. Parker Posey provides excellent support, and has a heartbreaking and frustratingly real scene when her friends seemingly abandon her.

A very cheap and plainly looking film (though that's probably half the point), Clockwatchers doesn't have enough of a satisfactory conclusion to make this entirely successful, but still remains a film you shouldn't judge by its tacky cover.