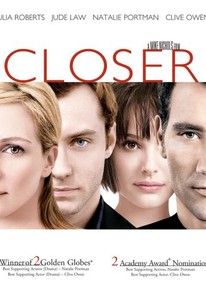 Closer is no joke and it's got the brave, mature performances of an all-star cast to prove it. It's a movie in which characters feel each other up with their hands and knock each other down with words.

Like dramas by Pinter and others, what seems trenchant and perfectly pitched in the theater can come off as arch even when skillfully transferred to film.

Owen and Portman give excellent, committed performances, leaving Law and Roberts in the shade.

Thanks to Marber's whiplash dialogue, the cast suffer with an eloquence that's uncommon in the movies, but that's about as far as it goes.

Closer, a lacerating four-character suite on the elusiveness of love and intimacy, finds Nichols returning to his roots without having lost his sardonic edge.

'People are filthy, they're not worth lifting a finger for.' Closer conveys this sentiment more powerfully than anything else.

Clive Owen gives the deepest and most emotionally nuanced performance as a dermatologist desperate for love and loyalty, and Natalie Portman is a close second as the coy stripper beholden to Jude Law's self-centered, stalled writer.

Closer's world is a gentle one, a place of kindness. It is these people who are bringing spite into it.

Each frame of the film seems infused with vibrant life, even when the tone switches from dark to darker.

For all its stunt casting and knee-jerk sexual frankness, Closer gives an underlying resonance to an emotional world that is normally the preserve of glossy soap operas.

Closer takes the traditional notion of romance and attempts to batter it into submission, mostly through the constant application of swear words.

Once in a lifetime a film/play like this comes up, one that works as a true mirror to our own faults, flaws and vices, embodied by four fascinating, multidimensional protagonists who hurt and manipulate one another, using their words as cruel weapons and revealing their innermost weaknesses in the process.

I don't quite remember this film. Watched it a long time ago. Not particularly memorable I suppose.

Based on a play (and written by that play's creator), this is a film about love, lust, relationships, betrayal, and a generalization about some, but not all, facets of human sexuality and desire. It covers a period of several years and follows four people who all start as strangers with one another, but end up tightly connected (and disconnected) over and over again. It's a good concept, and a lot of it works, but I feel like this was better as a stage play sense it really doesn't come off as all that cinematic in its execution. Also, it's rather pretentious and I'm not sure if this is quite what it really could have been.It makes some good statements about the human condition, but I was left a little underwhelmed. I will give this film a lot of credit and say that it does have some sharp writing, great dialogue, and some fantastic performances. It has a few scenes that are just absolutely fantastic and rather devastating, but I also feel like this film could have been far edgier, scathing, and really do the topic justice. As I mentioned above, the acting is great. All of the four mains are firing on all cylinders, yet it's the two women who really shine here, mostly because they are each playing characters that help them shed certain images and reputations they have acquired. That's not to say that the men don't excel, because they do. The men just don't have the better roles (but each does get a few really good moments with their roles). People seem to love this movie, but I just can't get onto that bandwagon. It's good, really good at times, but I feel like it's a watered down version of what it could have been. I was left underwhelmed, slightly dissatisfied, and hoping that the statements the film tried to make would really blow me away instead of being mostly interesting but not much more. Still, the film does have its moments, so that's why I'm still giving it a mild pass.

Hello stranger. Depressingly adult anti-romance. Compare with the the similarly themed and entertaining Carnal Knowledge for a look at what I think is director Mike Nichols losing a step or two - actually impressively little for 33 years down the road.