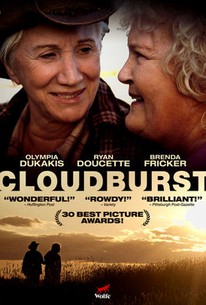 This hilarious foul-mouthed, lesbian road movie co-stars Oscar (R)-winning actresses Brenda Fricker and Olympia Dukakis as Dot and Stella, a crackerjack lesbian couple on the run from a nursing home. You'll laugh so hard you'll cry. Stella and Dot have been together for 31 years and have faithfully accompanied one another through life's ups and downs. Now in their seventies, Stella is hard of hearing and Dot is legally blind. Dotty's prudish granddaughter, Molly (played by Genie Award-winner Kristin Booth), decides the best place for Dot is a nursing home that will provide all the necessities. This forces Stella and Dot to make a bold decision: they will leave their hometown and make their way to Canada, where same-sex marriage is legal. It's a last-gap bid to stay together. En route to Canada, they pick up a young hitchhiker, Prentice, played by newcomer Ryan Doucette. A small-town boy turned modern dancer, he is returning to Nova Scotia to visit his dying mother. Despite his bravado, Prentice is a confused and wounded soul who has much to learn from Stella and Dot as they wage their own unexpected battle - after three decades, can they keep their family together? (c) Wolfe

Mary-Colin Chisholm
as Ynez
View All

Now Streaming: The Theory of Everything,The Great Beauty, and More

In its peaceful moments, it's a gem, but the wild stabs at wacky comedy are usually groaners, a shame in a story that's so smart and savvy when it isn't showing off, being dense, or winding down to a painfully pat ending.

It's a delight to see Olympia Dukakis and Brenda Fricker, superb talents and Oscar winners both, share almost every frame of Cloudburst.

An affectionate twist on a classic tale of lovers on the lam, sprinkled with renegade hints of Thelma & Louise, Cloudburst is a life- and heart-affirming journey.

Olympia Dukakis is utterly brilliant here, a magic mixture of brash and rude and tenderness and determination.

Dukakis and Fricker are as wonderful in the film as you would expect two veteran and experienced actresses to be. You believe that these two women were a lesbian couple in a committed relationship.

The two actors...bring out the best in these two women in spite of the plot lapses and odd tonal shifts...you believe wholeheartedly that these two are deeply in love, and Dukakis and Fricker gift their characters with a real bond of intimacy.

A rough-edged Olympia Dukakis steals much of this comedy road movie about two ageing lesbians who go to Canada to get married. Enjoyable, but unremarkable.

Features one of the funniest, bawdiest, most memorable scenes I've ever witnessed in a film. Despite the formulaic elements, it still feels like an original.

The film was not as emotionally captivating as the trailers suggested it might be. Still, it was competently filmed and acted with a nice story. It's also a positive sign of the times that the film was already outdated by the time of its release, with Maine (and all of New England) having already embraced marriage equality in 2012 -- making the illicit marriage run to Canada (the premise of the film) unnecessary. I suppose that should be celebrated rather than a point of criticism for the film. Try to imagine the film set in Montana, perhaps?