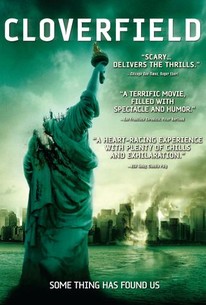 Producer J.J. Abrams teams with writer Drew Goddard and director Matt Reeves for this frenetic tale of a powerful destructive force that descends upon New York City, and the four desperate people who put their lives on the line to embark on a perilous rescue mission. Rob Hawkins (Michael Stahl-David) is a young American professional who has recently been offered a coveted new job in Japan. Eager to send his older sibling off in style, Rob's younger brother, Jason (Mike Vogel), and his girlfriend, Lily (Jessica Lucas), organize a surprise going-away party to take place the night before Rob boards his Eastern-bound flight. As the party gets underway, Rob's longtime friend and current love interest, Beth (Odette Yustman), shows up with another man as the dejected guest of honor's best-pal Hud (T.J. Miller) encourages partygoer Marlena (Lizzy Caplan) to wish him an on-camera farewell despite the fact that they barely know one another. Moments after Beth storms out following a bitter skirmish with Rob, the entire New York City skyline goes dark. Power is quickly restored, prompting partygoers to turn their attention toward the news, where they learn that a freight tanker has been overturned in New York Harbor. Racing to the rooftop in hopes of getting a better look at the situation, the group is terrified to witness a massive explosion that rains debris across midtown Manhattan, causing mass chaos and unparalleled destruction. But the worst is yet to come, because it soon becomes apparent that this is not the work of a terrorist or an act of war, but a massive creature beyond human comprehension. Now, as the military moves in and the streets of New York City become a virtual war zone, Rob, Lily, Marlena, and Hud race to rescue Beth and get out of the city before the powers that be unleash the ultimate weapon of mass destruction on one of the most populated cities on the planet. ~ Jason Buchanan, Rovi

Will Greenberg
as Party Goer

Roma Torre
as Herself

For gasps and thrills and movie monster mayhem, the film is a success. It's not flawless, but if you shove that aside, I guarantee you that you will have a gas at the theater.

It's like Abrams and crew have looked into the void and thought: the only thing worse than Armageddon is if no one witnessing it is hot.

A dazzling experiment that paid off immensely, this is cinematic pleasure at its purest.

The mechanism is the message in Cloverfield, a movie so aluminum-sleek, ultra-portable, and itsy-bitsy sexy, it's amazing Steve Jobs didn't pull it out of an envelope at Macworld.

It has a monster that terrifies, it moves at a fast pace, it creates characters I liked and cared about

Cloverfield is quite a stunning, fresh use of the found footage concept which cleverly updates the Godzilla-concept.

Predictably, the monster itself is one of the film's only weaknesses.

This is J.J. Abrams, the eye-catching bow of an all-in-one gift. [Full review in Spanish]

Most effective because Reeves creates it with a slice of life feeling that perfectly blends moments of courage, stupidity, selfishness, hopelessness, and outright humor.

This is a fun little frightfest bound to please those that have been captivated by the film's six-month viral campaign as well as people just looking to find that rare January release that actually entertains.

I was a bit reluctant to see this one, but I have to say that the effect of seeing from the point of view of someone in a town being ravaged by something that is not of this world and ultimately deadly in every way is quite creepy and mesmerizing. I don't say that too often. So you'd gather that the special effects would be quite impressive and you'd be right. I love it when someone comes up with a different MONSTER!!!

four and a half stars...

J.J. Abrams produces a graphic, in-depth look at terror in the streets of New York City. With a new style of direction as well as level of sci-fi thrills, Cloverfield is a menacing picture that keeps you guessing and jumping. 4/5

A unique look at the monster movie genre. Many will not like the film approach but i enjoyed it.