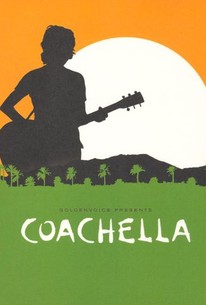 Filmmaker Drew Thomas brings California's popular Coachella Valley Music and Arts Festival to the screen with a different kind of musical documentary that not only showcases performances by some of the hottest acts to take the stage, but offers interviews with such musical icons as Beck, Joshua Homme, Mos Def, and Perry Farrell as well. From English icon Morrissey's performance at the inaugural Coachella Festival back in 1999 to Canadian indie rockers the Arcade Fire's electric 2005 set, the musical acts featured here run the gamut from hip-hop to alternative and virtually everything in between. Other artists featured include the Pixies, the Flaming Lips, Kool Keith, Radiohead, Saul Williams, and Squarepusher.

Iggy & The Stooges
View All

Captures the fun, beauty and excitement of the annual summertime rock festival of the same name.

An excellent overview of the ambiance and showcased talent at arguably the best annual U.S. rock festival ...

Unlike D.A. Pennebaker's great concert documentaries such as Monterey Pop and Don't Look Back, Coachella doesn't quite capture the stretches of tedium and fits of excitement that come with actually being at an event like this ...

Skinny rockers preach about the power of parties. You get a sense that people really believe Coachella can heal society. We feel so far away from that dumb optimism now.

A well-made, if insignificant, film about a well-managed, significant music festival.

Captures some musical moments that are worth the price of admission and a box of popcorn, such as the Mars Volta going buck wild or the Pixies' triumphant showing in 2004.

"Coachella" is an eminently worthy snapshot for contemporary music fans, not just of the festival but of the best in modern music

Just as SoCal was ripe for a multigenre, Euro-style music festival, so was Coachella ready for a documentary that captured the euphoric excitement of watching live bands and dancing to pulsating electronica in a sweaty, glow-stick-lit tent.

Though the acts don't have the heft required for concert-film greatness, they do comprise a sort of screen capture of the decade's musical movement.

There are no featured audience reviews yet. Click the link below to see what others say about Coachella!