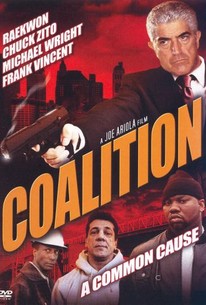 Bear witness to the systematic shakedown of New York City's lucrative construction business by non-union, minority laborers and see just how both sides of the law scramble to stay one step ahead of the game in director Joseph Ariola's tense look at the controversial SBM (Survival of the Black Man) coalition. Based on actual police accounts of officers who attempted to infiltrate corrupt coalition workers and co-written by retired New York City Police Detective Robert Cea, this gripping crime drama offers an unprecedented look at the mob heavies who carry-out backroom deals, the unions who struggle against impending layoffs, and the one desperate soul who is caught directly in the middle of all the dirty dealings.

Anthony Chislm
as Pastor
View All

There are no critic reviews yet for Coalition. Keep checking Rotten Tomatoes for updates!

There are no featured audience reviews yet. Click the link below to see what others say about Coalition!