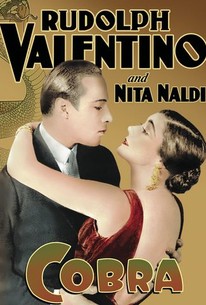 Silent screen idol Rudolph Valentino made his next-to-last screen appearance in this romantic comedy/drama. Count Rodrigo Torriani (Valentino) is a notorious ladies' man who has become the subject of a long list of breach-of-promise suits filed by disappointed former girlfriends, which has left him destitute. Needing to learn a new trade, Rodrigo comes to the U.S., where his knowledge of Italian artifacts is put to good use by Jack Dorning (Casson Ferguson), an antique dealer. While Rodrigo's new trade would presumably put him back on the straight and narrow, such is not the case, as he finds himself the object of two different women's affections -- Mary (Gertrude Olmstead), Jack's secretary, and Elise (Nita Naldi), a wealthy socialite. Cobra reunited Valentino with Nita Naldi, who had starred with him in Blood and Sand and A Sainted Devil; within a year of Cobra's release, Valentino would die unexpectedly, and within three years, Naldi would retire from the screen.

Henry A. Barrows
as Store Manager

There are no critic reviews yet for Cobra. Keep checking Rotten Tomatoes for updates!

Although this is a predictable romantic comedy, it is the only Valentino film that I've actually enjoyed. He has proven here that he can be funny and this was one of his last movies unfortunately.