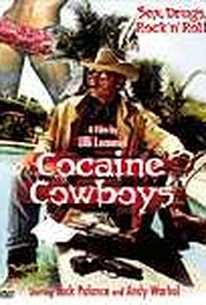 Cocaine Cowboys is an odd, simply dreadful little film which tries to be chic and innovative but merely succeeds in being confusing and tiresome. The film purports to tell the story of a rock group that supports itself between gigs by selling cocaine. This side business gets them into trouble with the mob. The only performances of note are those of Jack Palance as a mobster and of Andy Warhol, who allowed the movie to be filmed at his Montauk home. Director Ulli Lommel, at the beginning of his career, acted with Rainer Werner Fassbinder's entourage and branched out to directing as well as performing. While some of Lommel's work is distinctive and accomplished, Cocaine Cowboys should be avoided by all except those with chronic insomnia. ~ Linda Rasmussen, Rovi

Andy Warhol
as Himself

Viscerally shows how Miami became a leading city on the blood of druglords.

There are no featured reviews for Cocaine Cowboys at this time.