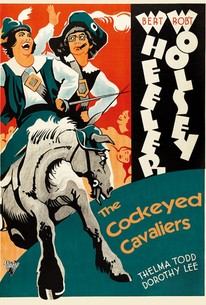 Considered by many to be the best of the many Bert Wheeler-Robert Woolsey vehicles of the 1930s, Cockeyed Cavaliers is set in Merrie Olde England, where the comic-opera ambience is immediately established when a Walter Winchellesque town crier (Franklin Pangborn) sings the local gossip. Bert and Bob play a pair of wandering indigents who are constantly in trouble because of Bert's chronic kleptomania. "My doctor tells me it's a sickness," he explains." Bob: "Well, why don't you take something for it?" Bert: "I've already taken everything." Bert's latest bit of unintentional larceny earns the boys a few hours in the local pillory, where the villagers pelt them with vegetables until they are rescued by a feisty young boy. Unbeknownst to our heroes, the "boy" is beautiful young Mary Ann (Dorothy Lee), who has disguised herself to escape an arranged marriage with the gross and gouty Duke of Weskit (Robert Grieg). Stopping over at a local inn, Bert, Bob and the in-drag Marian make the acquaintance of a lusty Baron (Noah Beery), who celebrates his recent hunting trip in song. Forced to make a quick getaway when the local constable shows up, Bert and Bob "borrow" the clothes of a pair of drunken royal physicians (Snub Pollard and Jack Norton) and escape in the doctors' coach, with Mary Ann still in tow. Following the instructions found in the coach, the boys stop over at the home of the Duke of Weskit, obliging Mary Ann to remain in disguise. Bert and Bob ingratiate themselves with the Duke by curing his stomach ache (using a horse-doctor book!), while Bob tries to make time with Weskit's gorgeous niece Lady Genevieve (Thelma Todd) -- never dreaming that "Genny" is the wife of the irascible Baron whom they previously met at the inn. All sorts of double-entendre nonsense ensues before Bert and Bob save themselves from the Baron's jealous wrath by capturing an elusive wild boar, a contingency that also permits Bert to wed Mary Ann, whose true identity has finally been revealed. Elaborately produced on leftover sets from RKO Radio's The Little Minister, Cockeyed Cavaliers is a gem of a comedy, filled to overflowing with clever dialogue and hilarious sight gags. Musical highlights include the novelty song "I Went Hunting (And the Big Bad Wolf is Dead)" and the delightful "Dilly Dally."

Robert Greig
as Duke of Weskit

There are no critic reviews yet for Cockeyed Cavaliers. Keep checking Rotten Tomatoes for updates!

There are no featured reviews for Cockeyed Cavaliers at this time.