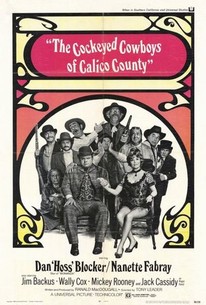 Charley (Dan Blocker) is the kindly but simple-minded blacksmith who sends a year's earnings back East for a mail-order bride. When he and the town turn out for the woman's arrival at the train station, he is embarrassed when she never appears. The saddened giant plans to leave town. The townspeople recruit the new saloon-girl Sadie (Nanette Fabray) to pose as the bride-to-be so the residents will retain the services of the blacksmith. Jim Backus is the sheriff who runs for mayor. Wally Cox plays Mr. Bester, the henpecked husband of his harridan wife (Marge Champion). Mickey Rooney, Stubby Kaye, Iron Eyes Cody and Jack Cassidy also appear in this western comedy.

Ray Ballard
as Carson
View All

There are no critic reviews yet for Cockeyed Cowboys of Calico County. Keep checking Rotten Tomatoes for updates!

There are no featured reviews for Cockeyed Cowboys of Calico County at this time.