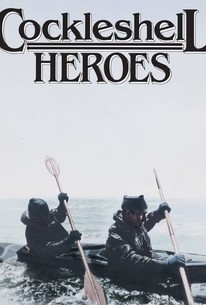 Jose Ferrer was both star and director of the British WW2 drama Cockleshell Heroes. Ferrer is cast as Major Stringer, the officer in charge of a delicate naval operation. Stringer and seven volunteers are expected to paddle four canoes into Nazi-held waters, plant limpet mines on enemy boats, and return safely to their own lines. Of the eight courageous saboteurs, only two survive. The story is abundant with suspense, humor and irony, buoyed by a top-rank supporting cast, including Trevor Howard, Victor Maddern and Anthony Newley (Christopher Lee shows up briefly as a German sub commander). Howard delivers the best performance as a subtly resentful officer who was passed up for promotion in order to work with Major Stringer. Cockleshell Heroes was released in the US by Columbia Pictures.

Jacques B. Brunius
as French Fisherman

It's so predictable one might easily tune out well before the action begins.

There are no featured audience reviews yet. Click the link below to see what others say about Cockleshell Heroes!