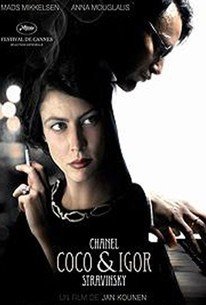 Critics Consensus: It's well-acted and beautifully filmed, but Jan Kounen's dramatization of the affair between his famous subjects is curiously short on passion.

Critics Consensus: It's well-acted and beautifully filmed, but Jan Kounen's dramatization of the affair between his famous subjects is curiously short on passion.

Critic Consensus: It's well-acted and beautifully filmed, but Jan Kounen's dramatization of the affair between his famous subjects is curiously short on passion.

At the Theatre Des Champs-Elysées, Igor Stravinsky premieres his The Rite Of Spring. Coco Chanel attends the premiere and is mesmerized. But the revolutionary work is too modern, too radical: the enraged audience boos and jeers. A near riot ensues. Stravinsky is inconsolable. Seven years later, now rich, respected and successful, Coco Chanel meets Stravinsky again - a penniless refugee living in exile in Paris after the Russian Revolution. The attraction between them is immediate and electric. Coco offers Stravinsky the use of her villa in Garches so that he will be able to work, and he moves in straight away, with his children and consumptive wife. And so a passionate, intense love affair between two creative giants begins.

Erick Desmarestz
as The Doctor

Eric Desmarestz
as The Doctor

Olivier Claverie
as Joseph
View All

Critics Consensus: A-Team, Karate Kid Reboots Both Not Too Bad

The whole movie has the immaculate visual gloss of a Chanel advert, which is no bad thing.

It's a tragic and sophisticated love story.

Anna Mouglalis makes for an icier Coco than Audrey Tautou, hardened by the death in 1919 of Boy Capel, the love of her life.

A beautifully designed but overly formal biopic that can't match the greatness of the artists it depicts.

Do I have to say it again? Celebrity is not drama.

If the aftertaste desired is one of artistic expression taking the place of human emotion, then job well done. But I highly doubt I'd have cared as little for either genius in the flesh as I did for their representation here.

Virtually nothing of these extraordinary times and figures is captured in this flashy dual biography.

It's perhaps appropriate that an affair between two people famed for their art, should be represented more through décor, music and mood than simple words and dramaturgy.

Despite all its pretensions, Coco & Igor is just the same old Hollywood story: a selfish and tormented hero is torn between a ruthless Joan Crawford and a self-sacrificial Lillian Gish.

An electrifying opening, a bit of a slog afterwards.

Stravinsky refuses to acknowledge [Chanel] as his artistic equal: 'You are not an artist, you are a shopkeeper' ... After this put-down, the couple's romance fizzles out ...

A soulless romance that lacks intensity and passion, with an atypically awkward Mads Mikkelsen and an insipid Anna Mouglalis trying hard to appear sophisticated but forgetting to look human - her character even mourns the death of her lover but we cannot see or feel her pain.

"Coco Chanel & Igor Stravinsky" starts in 1913 as a new ballet is being performed in Paris to a less than rapt audience. Instead of running away to stay one step ahead of the mob, composer Igor Stravinsky(Mads Mikkelsen) is bent on critiquing the dancers while Gabrielle 'Coco' Chanel(Anna Mouglalis) almost has an orgasm just from being in the audience. Seven years later, Stravinsky is one of many Russian exiles living in Paris. Chanel offers him and his family her country villa to stay at but out of pride he refuses. Changing his mind is worries over his wife Katerina's(Elena Morozova) health. "Coco Chanel & Igor Stravinsky" is an intriguing, handsomely produced and great looking bit of speculation centered around the collision of like-minded and obsessed individuals who would both change the world.(You have to figure Stravinsky is on the right track with the extremely mixed reaction he gets.) While I do applaud any movie that leaves things unsaid, it is more than a little disappointing how little passion is on display. Otherwise, I do not have much problem with the deliberate pace, even though the opening dance scene probably goes on too long. A couple of cinematic flourishes help offset that.

A beautifully shot, well-acted film, about two interesting, dynamic characters. This film was gorgeous, and passionate. Unfortunately the stately pace of the film descends at times into long, meaningful looks that are just too artsy for their own good. But it is still worth the time, because its design and performances do carry us through the occasional lulls. Do not expect much in the way of explanation of resolution about other affairs in his life (family, music, etc.). The movie is beautiful, but ends rather abruptly.

It takes a while for movies (especially foreign movies) to make it out here, but this one was worth waiting for. It was gorgeous! And it shed some light on a "collaboration" if that is the right word between these two creative giants. And it also made me realize just how jaded we have become: an affair used to be a marriage deal-breaker, not just business as usual. Worth seeing for the historical significance--I had no idea that Stravinsky's Rite of Spring caused riots in the theatre!--and the sheer beauty of that era. I (almost) wished I were there.