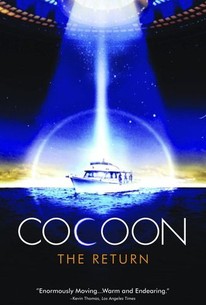 Cocoon 2: The Return, like most sequels, relies a bit too heavily on one's familiarity with the first film. Without dwelling too long on Cocoon #1, we can observe that it ended with a group of senior citizens heading for the distant planet of Antarea, hoping to find a new, rewarding and elongated life. Cocoon 2 picks up the action five years later: The Antareans return to earth to check on the damage caused to their life-regenerating cocoons by earthquakes. Coming along for the ride are the elderly couples whom we met in the first film. Also carried over from the first Cocoon are young ferryboat captain Steve Guttenberg and gorgeous Antarean Tahnee Welch, who resume their interplanetary romance. Oldster Jack Gilford, whose beloved wife died in Cocoon, likewise finds romance in the form of Elaine Stritch. A secondary plot involves an insidious secret government plan to exploit the Antareans, which is foiled by sympathetic researcher Courteney Cox. ~ Hal Erickson, Rovi

Will Marchetti
as Gen. Jefferds

Darcy Shean
as Woman in Restaurant

Mal Jones
as Man at Kiosk

Critic Reviews for Cocoon: The Return

The central weakness of Cocoon: the Return is that the film lacks any compelling reason to exist. Yes, it is a heartwarming film. Yes, the performances are wonderful, and, yes, it's great to see these characters back again. But that's about it.

Mostly we get reheated leftovers and with even more mawkishness from the older actors and unfunny schtick from Steve Guttenberg.

Near on par with the original...Sweet, Funny, Memorable

And here I thought the aliens ate them the first time.

Revolves around a group of older Americans who face important choices which will determine their destinies.

Should never have come back.

Brings back the same cast, but forgets the heart, wit, wonder, and warmth. This is a soulless sequel.

Audience Reviews for Cocoon: The Return

This movie doesn't really have much purpose, especially considering the amazing ending to the first film, but it's a ok watch which is boosted by the performances from the original cast. They give it something of a heart and warmth, but overall it's not something that everyone should see.

It's hard to believe that "Cocoon 2 - The Return" isn't more popular. The main cast from the original "Cocoon" return to earth and plan to visit for a few days. While the main cast is visiting with their family and friends, some oceanographers find a cocoon in an ocean and take it back to research it in the labs. Once the others that are here visiting find out, they pledge to save it before they leave. While they're here on earth, they try to set Bernie up with a new woman, even though his dead wife, Rose, is still on his mind all the time. More than half of the ones that came back to earth decide to stay at the end of the movie. Alma Finley finds out she has a liking for taking care of kids while her husband, Joe, is out enjoying himself with the other guys. She gets hit by a car trying to save one of the kids from being hit, and ends up in the hospital on the verge of death. The doctor tells Mr. Finley that she probably won't make it through the night. That's when the most memorable scene from the movie takes place. Mr. Finley goes in there and with the help of some good special effects, sacrifices his life for his wife to live and take the job with the kids like she wanted to. Ben Luckett gets closer to his grandson by teaching him how to hit a baseball and to not listen to the other people telling him he can't do it, but to tell himself that he can. Ben's wife, Mary also doesn't want to go away from earth again. While "Cocoon 2 - The Return" might not be as funny or original as the first "Cocoon," it does have a few funny parts and succeeds in other ways. It's a lot more of a heartwarming movie than it is a comedy and it's pretty much a laidback version of the original "Cocoon." If you liked the original, I would definitely recommend getting "Cocoon 2 - The Return." Even if you didn't like the original, give this one a chance because it is a good movie. NOTE: That was my Amazon review from the year 2000. I have to say I don't remember much from this sequel, other than being amazed at the special f/x for the time, but I do remember feeling strongly about it for awhile after I saw it. I need and want to see it again.

A load of fun, as the senior citizens from the original film come back to Earth to help their alien friends. The seniors have another chance to strut their youthfulness and visit their families - and some ponder their future. The cocoon-retrieval is a bit like Star Trek IV. It is a touching film for grandchildren too!