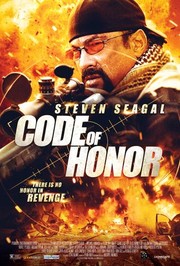 Paul B
½ June 2, 2018
This is such a poor movie it is difficult to think of a worse one. (Although saying that Adam Sandler's Eight Crazy Nights (2002) is, of course, on another level of grossness.) Terrible plot. Terrible acting. The dialogue is moronic. The only redeeming feature is watching Helena Mattsson. I could watch her sleeping. (Not intentionally creepy.) If you have any choice in the matter avoid like the Plague. Really really bad movie.

Tyler P
June 11, 2017
In this Steven Seagal fever dream, Steven Seagal plays the perfect killer, with action scenes containing the finesse of a tap dancing walrus and a plot that makes Taken 3 look like Shakespear. This movie contains a plot twist that would make M. Night cream buckets and has dialogue and special effects that would make George Lucas angry.

Overall this movie is so bad its sometimes the best thing ever and a very worthy sequel to Jimmy Neutron the movie.

I have since canceled my Netflix account, because it is all downhill from here.

Tyler R
May 12, 2017
Was actually of one the better Steven seagal movies I've seen in a while. Had a decent plot with more of a storyline then most of his movies. Was very violent and visceral and had lots of great action scenes with a good twist ending. Was pleasantly surprised.

James C
½ January 5, 2017
The quality of Segal's movies is inversely proportional to his girth. Should have skipped direct to video and gone straight to the trash.

Robert H
May 11, 2016
Ugh. It's a foregone conclusion that Seagal will never make anything again that lives up to his heyday in the 80's and 90's, but at least his DTV work up to this point had been quirkily interesting. As Seagal has aged and grown more portly, he's done less hand-to-hand combat and relied more on guns and knives, but the new trend seems to be that he barely appears in movies where he has the top billing. SNIPER: SPECIAL OPS was guilty of this, but at least that one had the good sense to be on the short and simple side. CODE OF HONOR is, quite frankly, one of the most cynical and shoddy pieces of work (and I use the term loosely) to ever have Seagal's name slapped onto it. Here, he plays Colonel Robert Sikes, a Punisher-like character who acts as a vigilante in his city to clean up crime. On his trail is a former protégé/friend who is trying to bring him in along with the help of the police. And, for some reason, there is a sleazy news team who follow them around trying to get a good story. So, you have elements of THE PUNISHER, SURVIVOR (the generic Pierce Brosnan movie from last year), and NIGHTCRAWLER, with none of the nuance or sophistication of each (at least the first and last ones). There are no characters with significant screen time to root for, as government, the police, and news media are all painted in such a bad way. Even Seagal who normally is likeable, if stoic, is stuck playing a character who straight up murders people. Of course, I was with the movie for about two-thirds of it because it was kind of entertaining in a bad way. However, a third act plot twist completely ruined the film for me. It's like the filmmakers/screenwriter were like, "Just kidding!" It honestly angered me a little bit, making the last half hour or so a real chore to get through. As for the action, which is what most people will care about, there is a decent amount of it although it's mostly shootouts and some knife-fighting. Seagal gets very little to do, and I was disappointed here just like with SNIPER: SPECIAL OPS. The opening scene was probably the best, and there was a couple short fight scenes towards the end that partially made up for how dismal the rest of the film was. Seagal also gets one of his trademark speeches about halfway through, although the politics of it rubbed me the wrong way. Ultimately, I feel like I've tested for the last time as a Seagal fan. These last two films were a whole new level of lazy, and I don't know if I can take it anymore. CODE OF HONOR is for Seagal fans only, and even then I'd still be hesitant.

May 7, 2016
Quite honestly, one of the worst movies I have ever had the misfortune of watching. I wish I could get the 20 minutes of my life back before I stopped watching it.