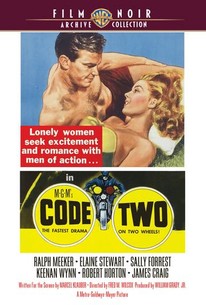 The modest MGM programmer Code Two follows a group of police academy aspirants from the grueling training process to their first days on the job. The plot concentrates on three of these trainees: self-satisfied Chuck O'Flair (Ralph Meeker), bridegroom-to-be Harry Whenlon (Jeff Richards) and married rookie Russ Hardley (Robert Horton). Eschewing the usual Hollywood cliché, it is Whenlon, rather than Hardley, who is the first to be killed in the line of duty. The film then segues into a lengthy chase, with O'Flair and Hardley hot on the trail of the truck hijackers responsible for Hardley's death. While most of Code Two is presented in the clipped, straightforward style of TV's Dragnet, the producers find time to display leading lady Elaine Stewart in a brief two-piece bathing suit. ~ Hal Erickson, Rovi

There are no critic reviews yet for Code Two. Keep checking Rotten Tomatoes for updates!

There are no featured reviews for Code Two at this time.