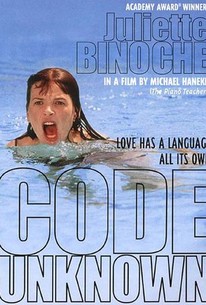 German-born filmmaker Michael Haneke continues the bleak, formalist experimentation of his 1994 breakthrough 71 Fragments of a Chronology of Chance with this similarly fragmented tale of racism, intolerance, and hatred in modern-day Paris. The focus of the narrative is split between three sets of people: the French actress Anne (Juliette Binoche), her husband and in-laws; a Romanian woman, Maria (Luminita Gheorghiu), who struggles to raise money for her family back home; and Amadou (Ona Lu Yenke), a teacher for the deaf who is at odds with his resolute African clan. The catalyst for the stories begins on a streetcorner, where Anne's brother-in-law Jean (Alexandre Hamadi) insults Maria, who is begging for change; incensed, Amadou picks a fight with Jean, resulting in negative repercussions for the triptych of protagonists. Throughout, Haneke punctuates the action with his unique editing and use of sound. After its Cannes debut, Code Inconnu made its North American premiere at the 2000 Toronto International Film Festival. ~ Michael Hastings, Rovi

Josef Bierbichler
as The Farmer

Djibril Kouyaté
as The Father

Didier Flamand
as The Director

Walid Afkir
as The Young Arab

Maurice Bénichou
as The Old Arab

Marc Duret
as The Policeman

Costel Cascaval
as Man in the Garden

Boris Napes
as Father in Cemetery

Isabelle Pietra
as Mother in Cemetery

Ion Haiduc
as Man in Squat

The violence, in short, remains unseen, but that makes it no easier to bear; what lurks and wails behind a wall is, for Haneke, the most reliable wellspring of dread.

A procession of long virtuoso takes that typically begin and end in the middle of actions or sentences, constituting not only an interactive jigsaw puzzle but a thrilling narrative experiment.

A searing, structurally ingenious look at racial tension on the streets of Paris.

This film, from Austrian director Michael Haneke, is one of the most uncompromisingly difficult and challenging of the year.

All this unrelenting bleakness would be fine if it went someplace interesting, but the film's themes never coalesce into anything beyond basic existential angst.

While its reputation has been overshadowed by later works from the filmmaker, it remains a provocative deconstruction of modern anhedonia.

It's a great entry point to his filmography, serving as a good example of Haneke's visual and thematic style.

Code Unknown is an unusual example of a movie that is socially aware, but that is thankfully equally aware of how tiresome moralising and preaching can be.

If some of the political theorising is somewhat naive and the direction is occasionally manipulative, the acting, particularly from Juliette Binoche, is superb.

Haneke brings his usual dark sensibility to bear on the multifaceted story, expressing the fractured quality of modern city life through scenes that wander through a labyrinth of missing links and lost connections.

With virtually no music and very little expository dialogue, this is one of the rare films with enough faith in moviegoers to let them figure things out for themselves.

An intelligent and post-structuralist narrative exercise that, shot in a series of single-take fragments, plays with the structural codes that form the basis of storytelling to reflect how people can't understand each other in this society with their very own signs (languages, gestures, cultures, moral values).

A strange tale, if indeed it can be called that. The subtitle, "Incomplete Tales of Several Journeys" sums it up pretty well. Juliette Binoche was lovely and carried the film. The rest was just window dressing and had no obvious connecting narrative, or meaning, beyond each individual scene. The use of jarring jump cuts from one scene to the next emphasized the discontinuity and left one somewhat bewildered as to how it all fit together. That obviously was the director's intention, but it just didn't work for this viewer. If this was supposed to spotlight the way the various characters interconnected, then it succeeded on only a most superficial level. Their lives may have intersected briefly, but one could hardly call it any more than that. Quite disappointing overall.

Very complex intertwining stories about life in modern society. Sort of like Crash, only for Adults.

An engrossing, cleverly constructed film from Michael Haneke (Hidden, The Piano Teacher). Since Haneke continually refuses to answer any questions regarding his films or the meaning of his themes (a word he hates), I can only offer my own opinion as to what is going on here.

Incomplete scenes showing moments in the lives of a French African teacher in a school for the deaf, a Romanian refugee, a photographer, a teenage runaway and an aspiring actress are cut together, possibly in sequential order, and intersect and connect in various, sometimes subtle ways. The film seems to be about the ways in which these characters feel alienated in society. There are breakdowns in communication because of generational differences, xenophobia, apathy, personal aspirations and more besides.

Each 'moment' finishes with an abrupt blackout, sometimes with characters in mid sentence, and the couple of seconds between two segments often feels likes a chance to absorb what is going on, or allow for a 'breather'. Aside from one ingenious segment where the question of reality comes into focus, each scene is filmed without cuts, either with the camera positioned statically or on tracks, which seems to both heighten realism whilst maintaining an artificial feel, if that's even possible.

I'm not exactly sure if the film is entirely successful and some of the scenes feel superfluous, but there's some gripping and thoughtful stuff here. Juliette Binoche is especially excellent as the actress, with one particularly stand-out scene where she rehearses for a film role direct to camera; her performance (of a performance) had me utterly gripped for the few minutes the section lasted.