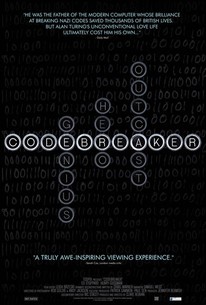 Codebreaker tells the remarkable and tragic story of one of the 20th century's most important people. Alan Turing set in motion the computer age and his World War II codebreaking helped turn the tide of the war. Instead of receiving accolades, Turing faced terrible persecution. In 1952, the British Government forced him to undergo chemical castration as punishment for his homosexuality. In despair, Turing committed suicide. He was only 41 years old. Documentary elements seamlessly interconnect with dramatic scenes in Codebreaker to offer the first complete picture of Turing, his accomplishments and his lasting legacy. -- (C) Official Site

Excellent and engrossing due in large part to the work of director Clare Beavan, editor Leigh Brzeski and actor Ed Stoppard.

There are no featured audience reviews yet. Click the link below to see what others say about Codebreaker!