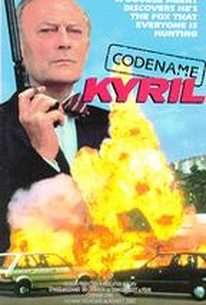 Based on John Trenhaile's A Man Called Kyril, this byzantine-plotted spy melodrama stars Ian Charleson in the title role. Kyril is a supposed Soviet defector who relocates in London. In fact, his defection is a smoke-screen: Kyril has been sent by the KGB to seek out a British mole in Moscow Centre. At four hours, Codename: Kyril affords plenty of breathing space for the various plots and counterplots, but its excess of espionage verbiage may prove confusing to the average viewer. Filmed for British television in locales ranging from Norway to Holland, Codename: Kyril was first telecast in the US on the Showtime cable network on April 27, 1988; a videocassette version running 115 minutes was made available in 1991.

Antony Carrick
as Head of Staff

David Lyon
as Burrows
View All

There are no critic reviews yet for Codename: Kyril. Keep checking Rotten Tomatoes for updates!

There are no featured audience reviews yet. Click the link below to see what others say about Codename: Kyril!